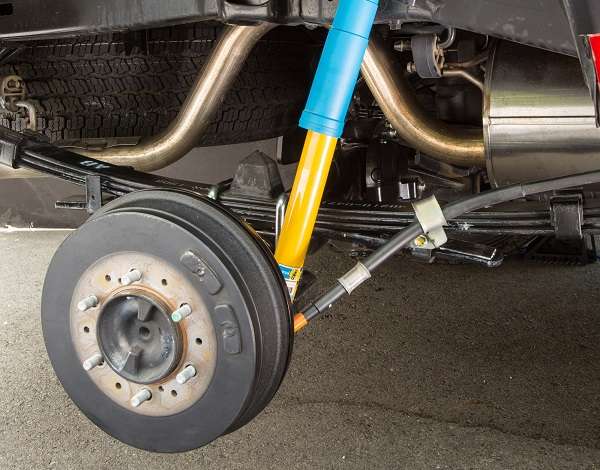 Here is our opinion and the other side of the story on the Tacoma’s rear drum brakes.
Advertisement

Toyota’s 2016 Tacoma has new updates to the V6 engine, has new transmissions, has a new interior, and a new exterior. There are fixes, corrections and updates everywhere one looks. However, look through the new rims at the rear of this truck and you will not see disc brakes.

This absolutely horrifies some Tacoma fans. Of course, the Tacoma in their driveway has drum brakes. Still, many see it as a backward-leaning technology. Something that has been surpassed by newer technology and is simply a no-brainer on a new truck. Were this a sports sedan, sports car, or even a sporty mid-size we would agree that drum brakes do seem out of place, but on a truck, not so much.

Trucks are very heavily weigh-biased in front. With no cargo in the bed, a pickup does not use the rear brakes very much to stop the vehicle. The front discs do much of the work, in fact, almost all of the work. Even with brake force distribution technology the front brakes are carrying most of the burden. Aaron Cole at TheTruthAboutCars asked Mike Swears, Tacoma’s Chief engineer, about the rear drums. Swears, said, “Discs are great when it comes to ventilating heat from heavy towing, but we’re not hearing that need from Tacoma owners.”

This being an opinion piece, I will give you my six great reasons why I would prefer rear drums on a Tacoma. The first two reasons are the rear calipers on my (used) 1979 Toyota Celica Supra. Both froze, and I had almost no money back then to deal with it. The second two reasons are the two brake calipers at the back of my 2007 Toyota Highlander, both of which froze last year and were replaced at about the cost of the complete Supra when it was young. The last two reasons are the two rear calipers on my Lexus 2010 IS 350C. They were replaced last week after I had determined they were frozen. I am smarter now, and I have a Lexus extended warranty. Otherwise, I would have shelled out $1308.04 according to Lexus if I had wanted new Lexus calipers.

Tacomas are supposed to be one of the most reliable vehicles in Toyota’s fleet. Take the drums. Smile.

UPDATE: Check out how the drum brakes performed when towing a 5,000 pound horse trailer and with a half-ton of feed in the bed.

Related Stories:
VIDEO - Will this Toyota Tacoma's brakes stop it in time?
How many more Tacomas could Toyota sell if it offered a diesel in the U.S.?
2016 Tacoma TRD - Goodyear beats out BF Goodrich K/O Michelin ORP

Mark Day wrote on August 29, 2015 - 3:35pm Permalink
Didn't understand why brakes have shown constant reliability problems, in Toyota-manufactured vehicle surveys, I do now. Thanks for the info.
John Goreham wrote on August 29, 2015 - 6:39pm Permalink
My dad had a Celica GTS back in the day. Both rear calipers froze. We are batting 1,000 in my family. I had forgotten that until he read the story and reminded me.
Mark Day wrote on August 29, 2015 - 7:00pm Permalink
Your could now possibly be a certified Toyota brake specialist! How will I know when my RAV4 rear brakes freeze? Dashboard warning?
John Goreham wrote on August 30, 2015 - 8:45am Permalink
No, there is no dashboard warning when the rear calipers freeze. On my Highlander I could sense the stopping power was diminished during hard stops. That vehicle has a system to automatically employ full braking power when it senses a panic stop. It was coming on frequently. - On the Lexus coupe I could tell that the brakes had lost some of their power and I asked my technician to specifically check for frozen calipers. He did a visual inspection of the pad thickness, drove it and called it "fine." I asked that he then remove a wheel and caliper to see if it was moving when the brakes were applied. He then found they were both frozen in back. I think the Supra frozen calipers were discovered when the car was inspected for brake wear, they were found to need pads and the tech could not move the caliper piston back to insert the new pads. That was hardest one for me. I was without the car for a week and I had to scramble to get the money to fix it.
Frank C wrote on August 30, 2015 - 10:47am Permalink
1st - disc brakes are so simple to work on. A little grease on the pins would probably free them up 2nd -why take this brake work to the dealer that gouges your eyeballs out with the price? Go to your trusted local mechanic for a lot less if you can't do it yourself.
John Goreham wrote on August 31, 2015 - 2:22pm Permalink
Good point Frank C. It is not the pad retaining pins that freeze, The piston inside the caliper is what freezes. Sometimes they can be freed up, but often not. I do trust my Lexus mechanic (Billy). I do also use local mechanics for some work and I have had mixed results. The extended warranty covers all the costs, and the black painted calipers that were replaced are the same as those that came off, keeping the look of the car the same. The prices Lexus charges me for work on the Highlander are higher than a good local mechanic, but I don't know of any local mechanics that have free loaner cars. My Lexus dealer has 94, all less than a year old. Lexus also has a free café if I need to wait for some reason, the car gets washed and cleaned inside, and if any Lexus warranty work is done the car is filled with gas. It is an indulgence keeping the IS 350C, but not much more expensive than some other things people do with money. The calipers should not be freezing up in the LexYodas and that does bother me.
Frank C wrote on August 31, 2015 - 8:54pm Permalink
Oh, I see. With an extended warranty I'd go to the dealer as well. But very odd that the pistons are seizing. That's something that doesn't happen very often.
Mark Day wrote on August 31, 2015 - 2:51pm Permalink
Re: Extended warranty. When buying my last Toyota I was not offered a Toyota extended warranty – just some aftermarket unknown. In the past I got burned on one of those.
John Goreham wrote on August 31, 2015 - 7:38pm Permalink
Yeah, the third party ones are not the same. I had good luck with a Honda and Subaru one in the past, always directly from the Mfg. I started getting them when I was an on-the-road salesman. I got reimbursed for my car costs and I liked having a fixed cost of ownership (no surprises). The reason I bought the Lexus one is the convertible top is crazy. I worried I might be stuck with a huge bill if it broke after the warranty was up, but so far the top has been fine. This Lexus warranty was pricey, but I pay no deductible and so far it has been just as promised.
bob wrote on September 23, 2015 - 4:06pm Permalink
Poor brake service (in the form of fluid changes every third year) are the main cause of frozen calipers. Brake fluid accumulates water ((at the various seals in the system, which aren't perfect), and that causes corrosion. Furthemore, excess water reduces the fluid's boiling point.
thomas wrote on December 15, 2015 - 2:26pm Permalink
WoW! I have never seen a author twist themselves in a pretzel to explain away the old school / cheap way out for toyota to NOT put 4 wheel disc brakes on their vehicle. If it had been ANY other brand it would have been the worst thing this side of a pandemic outbreak. I just loathe seeing such biased reporting as this. You are toyota cheerleaders to a fault. If you think i am in error look at ALL the dozen articles heaping every kind of bull imaginable on the toyota trd ( turd). Wow.
John Goreham wrote on December 15, 2015 - 2:55pm Permalink
Thanks Thomas. It is a fair criticism. Every writer does have some bias. At TN we do look for the good in vehicles and then take that approach in the work -usually. We also do objective reports like this one calling out Toyota for failing a crash test (the model was redesigned in case you are interested). The Toyota Tacoma stops shorter than the new GM trucks according to some actual tests by other outlets. So there's that. http://www.torquenews.com/1083/2013-toyota-rav4-unsafe We also sometimes poke fun at a brand like this recent story: http://www.torquenews.com/1083/you-won-t-believe-cause-toyota-rav-4-recall