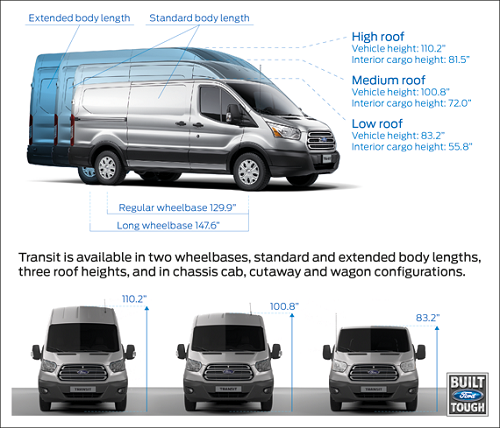 Ford's all-new design breaks all the rules and comes in one line for all markets.
Advertisement

The new Ford Transit commercial van will set new standards globally for vehicles of its type. Moving away from the body-on-frame design of the past, the new Transit will be a unit-body constructed workhorse with a design life of 10 years and 150,000 miles of severe duty. It will deliver this span of working miles while delivering a new standard for cost of operation. Not only will fuel economy change dramatically, maintenance costs and other aspects of the cost model have been closely scrutinized.

Ford began this long journey in 1961 with what was called the Econoline and then the E-series vans we all know. These vans became contractor’s workshops and haulers, they became airport shuttles, and they were used in a huge variety of ways to deliver people and materials to homes and worksites. What Ford is doing in this shift is really moving away from the pick-up truck based vans of the past to a new vehicle altogether.

The closest comparable van on the market in the US is the Sprinter, which is a Mercedes product at its core, but has been sold in the past by Dodge, and now by Freightliner. Chevy of course will still be a formidable competitor with its line of vehicles, and Nissan is moving forward with its NV cargo van. From the viewpoint of an auto journalist, it seems like we are seeing a shift towards Nissan and Ford trying to compete with one another globally for the large and small commercial vehicle business.

Ford Transit Model Overview
Ford is moving towards one Transit for world-wide sales. However, the Transit is really a line of vehicles. Unlike in the past when Ford offered one product for sale in the US and a variety of different vehicles for sale to do a similar job in other global markets, the new Ford Transit will be sold everywhere. The vehicle will come in various lengths and three roof heights (see photo). In the largest configuration, a six foot five-inch person could stand upright inside. That largest version will also haul almost twice the cargo of the current van Ford markets and will do so fuel efficiently.

In terms of drivetrains, the transmission is the easy part. Six speed automatic regardless of engine. There will be three engines. The venerable 3.7 liter V6 will be the standard. It will be augmented by the EcoBoost turbo 3.5 which is doing well in pickup trucks for Ford. This will be the replacement for the V8 and 10 cylinder engines now available. The most interesting engine offering will be the new Ford 3.2 liter five-cylinder turbo-diesel which is based on Ford Europe’s Duratorq line of engines. This new engine will meet the new US clean diesel standards. Ford can also provide natural gas ready version of the Transit and the base engine is compatible with E85 if the owner lives in a corn producing state.

Ford has spent a lot of time, money, and energy to determine for sure that their commercial van is cost effective. Targeting the GM 4.3 liter V6, Ford says it has lower cost of maintenance. To ensure durability test vehicles have logged over 4.6 million miles.

Ford’s new 2014 Transit will also be available with Synch and MyFord Touch. The new Transit built in Kansas will augment the smaller Ford Transit Connect built in Turkey. Look for sales to begin in Fall 2013.