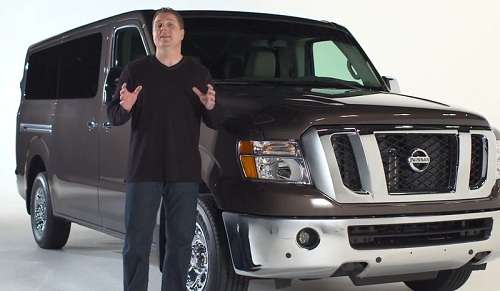 The Nissan NV line includes some great small vehicles, but sometimes size matters. For the contractor who needs to bring it all, this is the state of the art.
Advertisement

Nissan’s Titan underpinnings were too good to be used on just one vehicle, so Nissan expanded the use to the Armada, the outgoing Pathfinder Brute “ute, and now the NV Cargo and Commercial Vans are catching on. Commercial vans for contractors have undergone some radical changes for the better over the past decade. Once, vans from Chevy, Ford, and Dodge owned this market. The vans came in regular and long. They were all hard on the body, rusted, and were barely up to the task. The market has quite an assortment of smaller, but very useful vehicles, and also larger vehicles marketed by Chrysler and Mercedes. The Nissan NV will go head to head with the evolved vans from primarily Ford and Chevy.

The NV was introduced in 2011 as a passenger van. In cargo/commercial form it is available in either a standard or raised roof configuration. Rather than walk through every single specification, Nissan wisely focuses on the improvements it has made to the segment in its recent press information. Simple things like visibility out the side window and how comfortable one’s elbow rests on the open window sill matter. That is after all the contractors pose! More importantly, Nissan has made the vehicle more of a front engine layout than competitors. Those who remember the 70’s might remember that most vans used to have the engine in the console of the passenger compartment. That added unwanted heat in the summer, and it seriously impinged on the passenger and driver’s footwells. It was not really comfortable. The nose was stubby, which was sort of an advantage, but in a vehicle this ginormous, why not add a few inches to the passenger area? The Nissan offers wide footwells and the engine is not in the van with you.

Out back the NV is a big square. The two cargo doors swing out normally, and then can swing further back to rest against the sides of the van. Nissan calls this “Fork-lift friendly.” It looks back friendly too. Inside the van looks like one would expect. Attachment points for toolboxes are everywhere. Interestingly, Nissan thinks its competition for the NV includes pick-ups and that makes sense. More and more contractors seem to drive spotless fancy trucks with rims and wheels that look like they would break if driven over a jobsite. To address this, Nissan has outfitted the NV with all the usual console and storage areas.

The Nissan NV isn’t as exciting to read about as a Nissan GTR. However, if you are a contractor and looking for a new vehicle, this may be the Godzilla you are looking for.