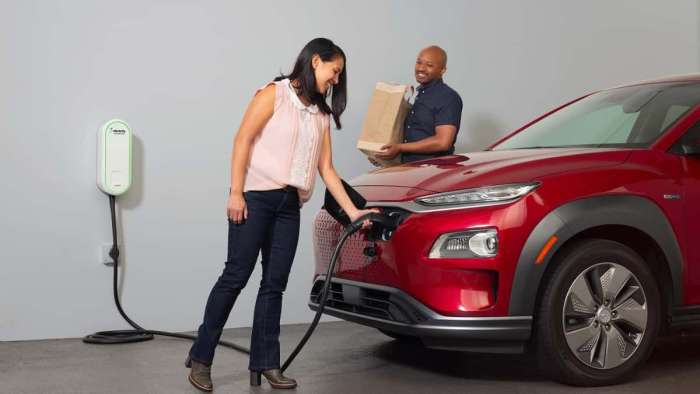 Consumer Reports had data showing the Kia Niro EV was the most satisfying vehicle in the eyes of owners. Here is why the Tesla Model 3 topped the list instead.
Advertisement

Consumer Reports (CR) recently updated its Top Ten Most Satisfying Cars list. Every model on the list deserves its spot. However, the Kia Niro Electric Vehicle had an ownership satisfaction score from CR that tied the Tesla Model 3, the top vehicle on the list. So why didn't CR include the Niro EV?

Kia Niro EV vs. Tesla Model 3
The Kia Niro Electric Vehicle is one of three ways that Kia builds this green vehicle. The all-electric version is one of our favorite test vehicles of 2019. It impressed us so much that we drive it to a Tesla dealership that had invited us to test-drive the Model 3 and drove the two back to back. In many ways, including overall driving satisfaction, we found the Niro EV our favorite of the two. It's that good.

Kia Owners Love the Niro EV
Owners of the vehicle report a similar viewpoint in CR surveys. When asked if they would definitely consider buying the vehicle again, 92% of owners CR received surveys back from said "Yes." That makes the Kia Niro EV the highest-ranked vehicle for owner satisfaction, tieing the Tesla Model 3 which earns the same rating. Yet, the Kia is left off this new list.

To find out why, we phoned our contacts at the media-relations department of CR. During the holiday week. We were thrilled that Michael Monticello of CR, took time during this busy period to phone us back and to answer our questions.

Kia Niro EV Markets
Mr. Monticello explained that the first reason that CR left the Kia Niro off this list is that Kia does not sell the car in every market. Kia does sell the Niro EV in every target EV market. That being the ZEV-compliant states like Massachusetts that mimic the California emissions guidelines. However, the Niro is not for sale everywhere - yet. And it may not be for a long time to come. Kia told Torque News recently on the record that the company is sending most of its limited EV capacity to European markets.

Related Story: On the Record: Kia Explains Why The Niro EV's U.S. Sales Are So Low

The second reason that CR opted to keep the Niro off of this list is the incredibly small sample size the organization had to draw from. Although the list contains vehicles that sell in literally the single hundreds per month in America (the Miata for example), the Niro's sales are even more limited. Kia has only sold about 1,200 total in the U.S. (and coincidentally CR owns one of them!) Although CR did have owners who bought a Niro EV and did respond to the survey, in this case, the group felt that it was not really a mainstream model that should be on this list.

We don't disagree with either reason for keeping the Niro off the list. We love the Niro EV, but feel that Kia and other automakers should not make EVs in such small numbers. It is not helping the industry or the environment in any way to do so. Fish or cut bait, Kia. We hope to see the Niro on dealer lots nationally at some future point, but for now, it is as rare as a unicorn.

Duke Woolworth wrote on December 29, 2019 - 4:37pm Permalink
Most Chevy dealers in NE Ohio have no Bolts, and few places to charge, and certainly no Kia EVs are available within hundreds of miles, so no service, either. The Tesla dealer near us has no outside charger to use our conversion cable. DC Chargers are miles away. So we have two '19 Bolts, which fit our short trip lives. We converted a 3 way circuit for outside lights on the garage to 2 way controlled from the house to 220V to rapid charge the cars. This is working quite well,and in cold weather, often.
David T wrote on January 10, 2020 - 10:42am Permalink
You wrote: " Kia has only sold about 1,200 total in the U.S. " I have been looking for this data out of personal curiosity, and also the total production run size for the Niro EV (and a breakdown by country would be icing on the cake.). I am curious where you got your 1200 number. Thanks!
John Goreham wrote on January 10, 2020 - 1:16pm Permalink
Thanks for asking! I use Inside EVs as my source for EV sales data. WHen Mfgs don't supply the data in the monthly or quarterly sales report INside EVs will look at vehicle registrations to tease out the data. Also, we have PR contacts we can reach out to who will usually provide the detail we want. Toyota and Ford are good examples of that. Cheers

LG's New EV Battery Plant Is a Welcome News for Tesla
Tesla Giga Berlin's New Hurdle: It's Not Only the Gov't, but Now Tesla Itself
END_OF_DOCUMENT_TOKEN_TO_BE_REPLACED