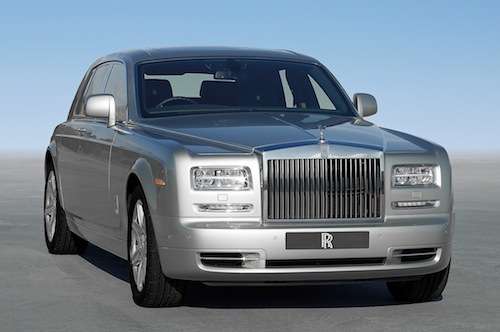 When Rolls-Royce recalls a vehicle, it does it with a certain panache that's only befitting of its super-rich clientele.
Advertisement

Rolls-Royce is recalling select model-year 2013 Phantom vehicles due to a possible fire risk. Affected vehicles may be missing an anti-misfueling device, which prevents misfueling and discharged static electricity. The absence of the anti-misfueling device increases the risk of fire, according to the National Highway Traffic Safety Administration. The Rolls-Royce Phantoms in question were manufactured from November 2, 2012, through January 18, 2013. The recall concerns 27 Phantom vehicles.

Although Rolls-Royce announced the recall yesterday, the luxury automaker has already examined 26 or 27 Phantoms involved in the safety recall. Of the 26 vehicles looked at, none of them have been missing the part. Rolls-Royce reports that the one remaining customer is out of town, so they’re waiting to inspect the vehicle. The automaker also indicates that as many as 72 Rolls-Royce Phantom models may have been affected worldwide.

Phantom owners that have been not been contacted can call Rolls-Royce at 1-877-877-3735. Owners of affected vehicles will receive fuel filler neck replacement, free of charge. Concerned Rolls-Royce Phantom drivers can also contact the National Highway Traffic Safety Administration’s Vehicle Safety Hotline at 1-888-327-4236 or online at www.safercar.gov.

As might be expected with a car that costs upwards of $470,000, Rolls-Royce provides owners with a one-of-a-kind recall experience. “When you’re at this level you shouldn’t have to accept any compromise,” said Oleg Satanovsky, Product Communications Manager at Rolls-Royce Motor Cars, to AutoGuide.com. “Really our philosophy from designing your own car, to taking delivery to service should be as effortless as possible.”

In the event of a recall, Rolls-Royce provides customers with a dealer pickup service so owners don’t have to leave their homes. The unique service is all about making the recall process as convenient as possible for customers, according Stanovsky. Additionally, each Rolls-Royce dealer process one or two demo vehicles in case an owner requests a loaner vehicle during the recall.

Stanovsky also touts Rolls-Royce’s warranty as another striking difference, which set it apart from other luxury brands. Each Rolls-Royce is backed by a 4-year unlimited-mile warranty.

Thursday’s recall marks the automaker’s first recall since it recalled 60 model-year 2010 to 2011 Rolls Royce Ghost models due to a fire problem last summer. Specifically, affected vehicles contained a faulty water pump circuit board that may overheat and catch fire. The August 2012 recall was nearly identical to a November 2011 recall that involved the 2010 Rolls-Royce Ghost.

Originally introduced in 1925, the Rolls-Royce Phantom was the automaker’s replacement for the Silver Ghost. Now in its seventh generation, the current Phantom is the brand’s full-size flagship model. The 2013 Phantom is available as a 2-door drophead coupe/convertible, 2-door coupe and 4-door saloon.