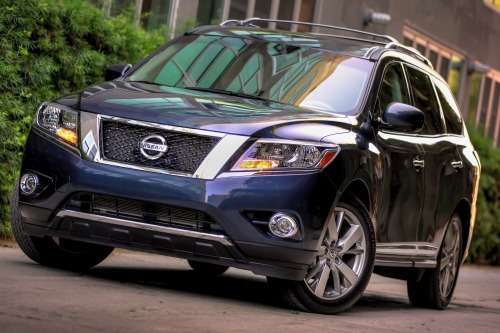 Affected by Thursday’s recall are 19,258 model year 2013 Nissan Pathfinder and Infiniti JX vehicles manufactured between December 2012 and January 2013. The vehicles in question may be equipped with front brake torque members that were improperly cast. As a result, the improper casting may cause structural weakness, which can lead to premature failure and cracking.

If the brake torque member fails, the brake caliper may move and contact the inside of the road wheel, resulting in reduced braking, according to the National Highway Traffic Safety Administration. Consequently, reduced braking increases the risk of a crash.

Nissan first became aware of the problem in March after receiving a field report involving front brake torque member failure on a 2013 Nissan Pathfinder. After a month-long investigation, the Japanese automaker concluded that a safety-related defect existed, prompting today’s recall.

Nissan will begin notifying customers of the recall in early May. Authorized Nissan dealers will inspect the manufacturing date of the torque members and replace them, as necessary, at no cost to the owner. In the meantime, owners can contact Nissan Customer Service at 1-800-647-7261. Concerned drivers may also contact the National Highway Traffic Safety Administration’s Vehicle Safety Hotline at 1-888-327-4236 or go to www.safercar.gov. The NHTSA campaign number is 13V139000.

Today’s recall comes one week after Nissan recalled about 480,000 Nissan and Infiniti vehicles globally due to a dangerous front passenger airbag flaw. The affected vehicles may contain defective front passenger airbag inflators, which may cause airbags to deploy with too much pressure. As a result, the rupturing airbags may send debris flying toward passengers. The airbag recall concerns roughly 265,000 model year 2001-2004 Nissan Maxima, Pathfinder and Sentra; and Infiniti FX and QX4 vehicles in the US. The recall also affects 137,000 vehicles in Japan, as well as another 78,000 in Mexico, Canada and Europe. Click here to read Torque News' coverage of Nissan's sizable airbag recall.

Authorized Nissan and Infiniti dealers will replace the problematic canisters that house the propellant that activates the airbags at no cost to the owner. The recall is expected to begin in May.

Nissan previously issued an airbag-related recall in March concerning five 2013 models. According to NHTSA documents, certain Nissan Altima, LEAF, Pathfinder, Sentra and Infiniti JX35 vehicles may contain passenger Occupant Detection Systems (ODS), which do not meet specifications. Affected ODS units may malfunction, indefinitely suppressing the passenger airbag. Consequently, the passenger airbag may fail to deploy in the event of a crash. Nissan has yet to determine how many vehicles are impacted by the recall. Click here for more information on Nissan's March recall.