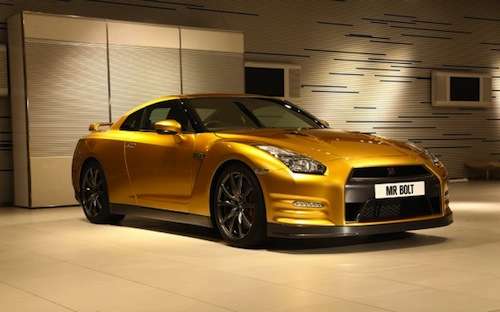 The gold-painted supercar will be auctioned off with proceeds going to Bolt's charity.
Advertisement

Nissan announced today that it has extended its partnership with the "World’s Fastest Man" Usain Bolt. Not only has the Japanese automaker named the Olympic sprinter its honorary “Director of Excitement,” but it also revealed a one-off “Bolt” version GT-R, a sports car introduced in 2007.

As “Director of Excitement” Bolt will help Nissan promote its global brand. “Racing is my inspiration, and I want to help Nissan become an even more exciting brand for everyone,” said Bolt on Thursday during his visit to Nissan’s Global Headquarters in Japan.

Perhaps the biggest unveiling on Thursday was an exclusive gold-painted GT-R, which will be auctioned off on Ebay. The custom supercar touts an interior with real gold finishing’s and an embossed signature from Bolt. Proceeds of the sale will go to benefit the Usain Bolt Foundation, whose mission is to help create educational and cultural opportunities for children in Bolt’s home country of Jamaica.

Aside from the one-off charity vehicle, Nissan announced that Bolt would work with the automaker to design a limited edition GT-R that will be available in limited markets. Nissan did not delve into the specifics of the project, but did say that more information will be revealed at a later date.

Nissan also said that Bolt would continue his contribution to the automaker’s “WHAT IF_” global campaign. Nissan and Bolt originally launched the ad campaign on the eve of the Olympic Games in London this past summer. Nissan’s first “WHAT IF_” ad featured the "World’s Fastest Man" and the 196-mph GT-R in a side-by-side comparison. Titled “What if you had no competition,” the clip showcased numerous attributes of Bolt and the GT-R including weight, speed and performance.

Nissan plans on releasing a new international TV spot called “What if you could drive the future, today?” this month. The commercial will feature the Nissan Leaf in an attempt to broaden the EV's global appeal.

No stranger to effective advertising, Nissan was nominated for an Emmy award for its Nissan Leaf “Polar Bear” ad last year. The National Fatherhood Initiative also honored the automaker for its “Baby” commercial in 2011.

Additionally, Nissan has received numerous accolades for its global prowess in recent years. Earlier this year, Nissan was included in Interbrand’s “2012 Best Global Brands” list finishing 73rd. The 73rd place finish was an improvement of 13 spots compared to one-year prior.

As for Bolt, he announced on Tuesday that he plans to defend his title as "World's Fastest Man" at the 2016 Summer Olympics in Rio de Janeiro.