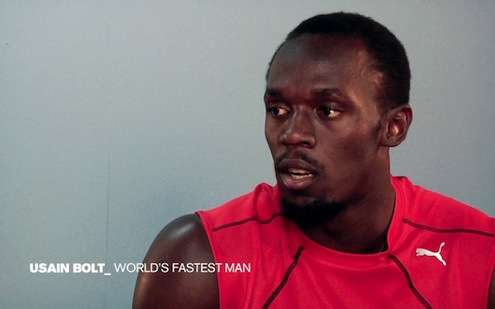 Usain Bolt vs 2013 Nissan GT-R is no competition [Video]

Olympic gold medalist Usain Bolt, the fastest man in the world is compared to the 2013 Nissan GT-R and there is no competition.
Advertisement

The world's fastest man, Usain Bolt, owns one of the world's fastest cars, the 2013 Nissan GT-R, and the gifted athlete will make a trip to Nissan's Global Headquarters gallery for a commemorative event on October 11, 2012. This is his first visit to Japan since the Olympics and Nissan is capitalizing on the event and is throwing a party for him and his fans. Of course the Nissan GT-R is a major sponsor of Bolt and the Japanese automaker wants to ride the coat tails of “the most naturally gifted athlete the world has ever seen.”

Since June 1st, advertisements for Nissan featuring Bolt have appeared at major world airports as part of the company's "WHAT IF_" campaign. The short video below show Bolt along side a 2013 Nissan GT-R and asks the question, “What if you had no competition?” Usain Bolt, the world’s fastest man was born in Jamaica in 1986, the Nissan GT-R, unrivaled supercar, in Japan, 2007. The brilliant marketing campaign features the 550 horsepower Nissan GT-R and Usain Bolt displaying the physical attributes of each one.

Bolt has 4 percent body fat, can bench press 308 lbs, can squat 705 lbs, and “dominates the track.” The video notes that Bolt has a reaction time of 0.146 seconds and can sprint from 0-100 meters in 9.58 seconds. The 2013 Nissan GT-R will sprint from 0-60 mph in 2.7 seconds and has a perfect launch every time with Nissan’s R-Mode start. The new GT-R has an improved drag coefficient of 0.26 with new ridges in the front fender, new bumper vent and a rear diffuser.

The ad points out that there is no competition for Bolt who owns numerous world records and has countless awards. Nissan claims the same things for the Nissan GT-R as it has world record lap times at the Nurburgring and numerous international awards. Nissan claims both Bolt and GT-R “can’t be beat.” Nissan has attached itself to arguably the most naturally gifted athlete to lace up a pair of running shoes.

Usain Bolt, confirmed those incredible talents by winning three gold medals and breaking three world records at the 2008 Olympic Games in Beijing, China. Bolt became the first man in Olympic history to win both the 100m and 200m races in world record times, and at the same meet, as part of the 4x100m team, they smashed the world record. And at the recent 2012 Olympic Games in London, Bolt defended all three Olympic titles with 100m, 200m and 4x100m victories, the latter in a new world record time of 36.84 secs.

Nissan is excited for Usain Bolt to visit their Global Headquarters this month and it should get the 2013 Nissan GT-R some attention as the world record holder owns and promotes one of the fast supercars.