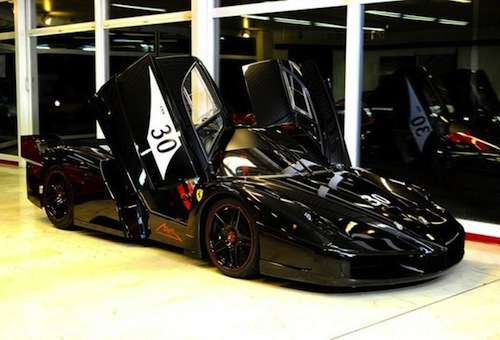 Michael Schumacher selling two of the rarest Ferraris in the world

The Formula One legend is selling his personal Ferrari FXX and Enzo, priced at $2.6 million and $1.47 million respectively.
Advertisement

Are you in the market for a lightly used Ferrari? How about two of them? Well, Formula One legend Michael Schumacher is unloading two of the most exotic Ferraris in the world: an FXX and an Enzo. Both of the cars are for sale in Switzerland on Auto Scout 24.

A truly one-of-a-kind vehicle, Schumacher’s FXX is one of just 30 ever produced in the world. Based on the Enzo, the FXX features an upgraded 6.0-liter V12 engine, which produces an impressive 790 horsepower.

It is the only black unstriped Ferrari FXX in existence and also touts red trimmed wheels, matte exhaust tips and Schumacher’s personal logo stitched on the seats. It was exhibited on BBC’s Top Gear in 2009. So what does a car of this magnitude retail for? This impressive ride will set you back a whopping $2.6 million.

As for the Ferrari Enzo, it features a 6.0-liter V12 engine and pounds out 651 horsepower. This red Italian supercar has 5,200 miles on the odometer, Schumacher’s logo on the seats, and includes the autograph of Ferrari Chairman Luca di Montezemolo. The vehicle is priced at $1.47 million.

Both vehicles were specifically built for Schumacher and given as gifts to the racing legend during his tenure with Ferrari, which lasted from 1996 to 2006. During that time, Schumacher won five of his seven Formula One Championship Titles – including five straight wins from 2000 to 2004.

Schumacher received a similar gift from Mercedes after racing his 309th and final grand prix race in 2012. The automaker gave the racing champion a W03 Silver Arrow as a parting gift. Schumacher raced for Mercedes from 2010 to 2012 after coming out of a four-year retirement.

Aside from his affinity for supercars, Schumacher also has a thing for Fiats. In fact, Schumach owns a Fiat 500 Abarth and a Fiat Croma.