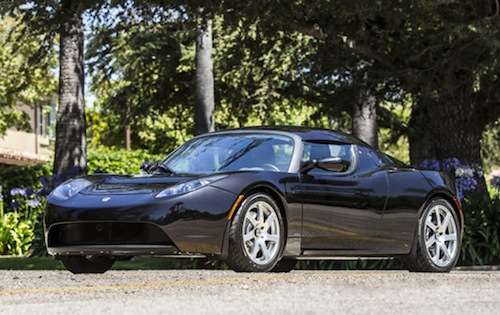 George Clooney auctioning off Tesla roadster for a good cause

Clooney's 2008 Tesla Signature 100 roadster will be up for grabs at the upcoming Pebble Beach Auction, which also features Jay Leno's 2012 Fiat 500.
Advertisement

Just days after Jay Leno announced he would be auctioning off his 2012 Fiat 500 for charity, Hollywood superstar George Clooney has decided to follow suit. Clooney is set to put his 2008 Tesla Signature 100 roadster at Gooding & Co.’s Pebble Beach Auction on Sunday, Aug. 19.

So what’s so special about Clooney’s Tesla Roadster? Aside from being previously owned by an Academy Award winner, this particular model has the unique distinction of being the eighth production Tesla built. Not to mention it is a limited edition model, complete with charging adaptors and accessories. As for specs, this Tesla vehicle features a single-speed, fixed gear transmission, 4-wheel disc brakes, 4-wheel independent coil-spring suspension, and a 375-volt AC induction air-cooled electric motor, which is capable of producing 248-bhp. The car is expected to fetch between $100,000-$125,000.

“We are overjoyed to present George Clooney’s Signature 100 Tesla at Pebble Beach because this is an incredible opportunity to purchase a modern collector car with all the right elements: one-owner, celebrity provenance, historical significance, limited-edition rarity and philanthropic ties,” said Gooding and Co. president and founder David Gooding.

Gooding went on to say, “We admire and respect Mr. Clooney’s talent and dedication to making a difference in our international community and hope his fantastic car will attract great support for the Satellite Sentinel Project and recognition of the lives his work saves every day.”

As Gooding mentioned, Clooney, a humanitarian and philanthropist, is auctioning the vehicle to benefit the Satellite Sentinel Project. Founded in 2010 by Clooney and John Prendergast, the SSP uses satellite imagery to monitor the borders in Sudan, with hopes of deterring civil war.

The upcoming Pebble Beach Auction also includes a Scaglietti, once owned by Andy Warhol. Aside from celebrity-owned vehicles, the auction also boasts countless Ferraris, Maseratis, Porsches, and a rare 1928 Bentley valued between $5.5 million and $7.5 million.