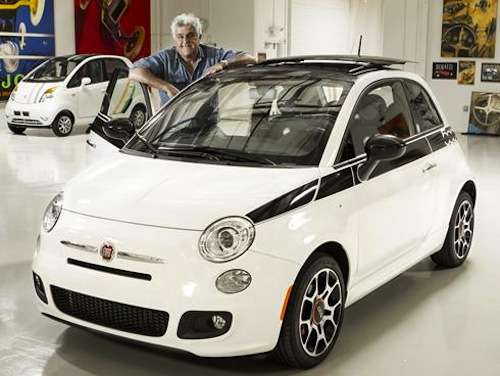 The proceeds from the auction will go to benefit the Fisher House Foundation, an organization that provides free lodging to military families and veterans.
Advertisement

Jay Leno’s garage is about to get a little smaller, because the comedian is auctioning off one of his vehicles for a good cause. The Tonight Show host will auction his 2012 Fiat 500 Prima Edizione at Gooding and Co.’s Pebble Beach Auction on Aug. 18. Aside from being a celebrity owned vehicle, this particular Fiat was just the second Fiat brought to America when Fiat began selling cars in the U.S. two years ago. Furthermore, the winning bidder can take pride in the fact that all the proceeds will go to the Fisher House Foundation, an organization that provides free housing to veterans and their families.

Leno’s Fiat 500 features a Bianco (white) exterior and black graphics. Leno has accrued just 800 miles since obtaining the vehicle. As previously mentioned, the car touts a serial number of 2 of 500, which is likely to help its value appreciate in years to come.

Despite his massive collection of vintage automobiles, Leno decided to choose his 2012 Fiat for practical reasons. In particular, it contains modern safety features and is a dependable vehicle, according to Leno. Even though Leno has decided to part with his Fiat 500, his wife still owns and regularly drives one.

Although the a new Fiat 500 retails for about $22,000, Leno’s ride is expected to fetch as much as $35,000. The total may go even higher because Leno is expected to appear on stage in order to drive up the bidding.