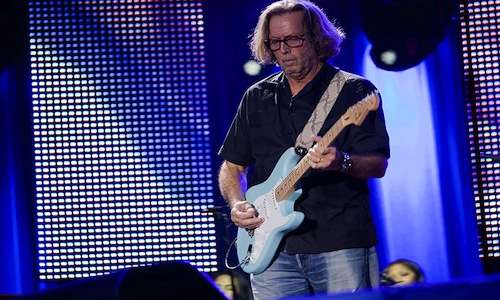 Although not confirmed, a new video appears to show a new Ferrari, which was custom built for guitar legend Eric Clapton. It was reported last year Clapton had commissioned Ferrari to build him a custom spots car. The vehicle is a one-off 458 Italia powered by a V-12 engine. Inspiration for the one-of-a-kind ride reportedly comes from the Ferrari 512 BB (Berlinetta Boxer) from the 1970s. As its name implies the 512 touted a 12-cylinder engine and came with a two-tone color scheme, similar to Clapton’s alleged vehicle.

According to GTSpirit, the official name of the English singer-songwriter’s car is SP12 EPC, which stands for Special Program 12 and Eric Patrick Clapton (the singer’s full name). Clapton’s unique Ferrari is equipped with angular headlights, like Ferrari's Enzo model, and a customized 458 body.

The video was posted to YouTube by user Shmee150 and showcases the personalized 458 Italia from all sides, revealing its modifications. Most notable are the vehicle’s rear alterations, which differ greatly from the standard 458. Clapton reportedly paid roughly $3 million for the specialized vehicle.

In addition to having a passion for music, Clapton has also had a long-lasting love for Ferraris. Clapton expressed his love for the Ferrari brand in a 2010 trip to the automaker’s Maranello factory. "I love the sound of a Ferrari and, as a musician, I can tell you that these engines really do have their own soundtracks,” said Clapton to Ferrari Magazine. Clapton also stated that the sound of the V-12 engine is his utmost favorite.

The Rock and Roll Hall of Famer even went as far as comparing his songwriting process to the manufacturing of a Ferrari stating: “When I write, when I play or when I’m in the recording studio or on stage, I can see the improvement, but I tend never to let things be. Let’s just say that I’m constantly striving to achieve perfection. I think it’s the same thing for Ferrari.”

Clapton will have to make room for his new custom Ferrari in his already crowded garage, which is filled with a vast variety of classic Ferraris. “My favourite car is the 250 GT Berlinetta Lusso. I’ve had it for about 40 years and I adore it. It’s a gorgeous car. The biggest and the one that I drive most often is the 612 Scaglietti. I also have a 599 that everyone thinks is better, but I personally prefer the 612. It’s a superb car,” said Clapton.

LG's New EV Battery Plant Is a Welcome News for Tesla
Tesla Giga Berlin's New Hurdle: It's Not Only the Gov't, but Now Tesla Itself
END_OF_DOCUMENT_TOKEN_TO_BE_REPLACED