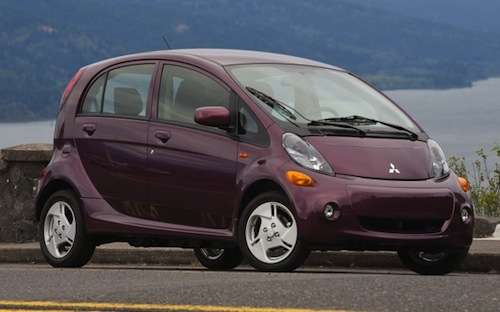 Consumer Reports has taken issue with the i-MiEV's electric range, which it calls "disappointing"
Advertisement

Consumer Reports has just issued an update on the all-electric Mitsubishi i-MiEV, which they purchased back in February. Unfortunately for Mitsubishi, the hatchback electric car did not hold up particularly well in the all-important “electric range” category. Consumer Reports’ test-drivers has been accumulating miles on the i-MiEV over the past few months and has concluded that the vehicle doesn’t go as far as they would like on a full charge. The site uses the phrase “range anxiety” to illustrate the uncertainty surrounding the i-MiEV’s electric range, or lack there of.

The less-than-stellar driving range proved to be quite the deterrent for Consumer Reports’ test-drivers. In fact, testers became apprehensive about driving longer distances in the fear that the vehicle would lose its charge. “No one can come to your aid with a gallon of electricity to tide you over… If your EV runs out of get-go, it means calling a tow truck,” said Consumer Reports.

On the bright side, Consumer Reports does state that the i-MiEV charges in a reasonable amount of time. The vehicle’s drive battery draws on 16 kWh for a full recharge. This process usually takes approximately six hours using a 240-volt charger, which is above average.

In addition to efficient charging times, the i-MiEV posses an awfully low operating cost of 3 cents per mile, based on the national average of 11 cents per kWh. While its operating cost is lower than the Nissan Leaf (3.5 cents per mile), the i-MiEV has a much shorter range than the Leaf (75 fewer miles per charge). Consumer Reports contends that the Leaf is a “much better car” and is worth the higher sticker price. The Leaf is priced at $38,100 compared to the i-MiEV’s $33,630 (not including federal tax incentives).