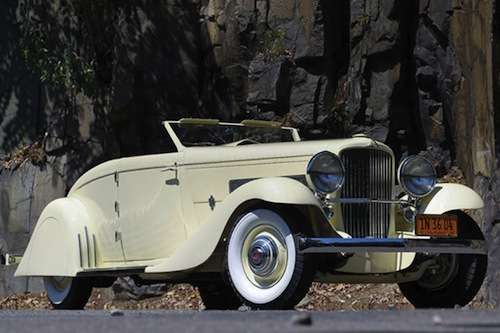 The hard-to-find vehicle was one of just 10 JN models built.
Advertisement

Just when it seemed that the 2012 Pebble Beach Concours d’Elegance auction could not get any better, the Gooding & Company auction house has announced that a 1935 Duesenberg, once owned by Clark Gable, will be up for grabs. The news comes just weeks after it was revealed that Jay Leno’s 2012 Fiat 500 and George Clooney’s 2008 Tesla roadster would be auctioned off.

Unlike the other celebrity-owned vehicles, Gable’s former ride is an ultra-rare vehicle, which is one of only 10 JN models built. Not to mention, Gable’s Duesenberg is just one of four examples of a convertible coupe, according to Gooding & Company.

Aside from being owned by a Hollywood legend, the car was featured in the 1938 film Merrily We Live. The Oscar nominated film starred Constance Bennett and Brian Aherne.

Another one of Gable’s vehicles, a 1938 Packard Eight Convertible Victoria, was sold for $282,000 in a 2009 auction. Legend has it that Gable initially sold the vehicle because swarms of women would chase after the car as he drove it. Consequently, the actor opted for a less eye-catching black coupe.

Nicknamed “The King of Hollywood,” Gable was an Academy Award winning actor known for his starring roles in Gone with the Wind, It Happened One Night, Mutiny on the Bounty and The Misfits. Prior to becoming an actor Gable was regarded as someone of a mechanic, known for stripping down and repairing cars with his father.

Also read: George Clooney auctioning off Tesla roadster for a good cause