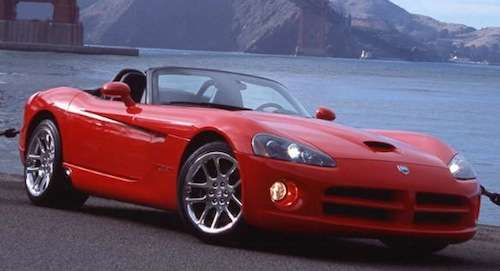 Chrysler's recall of the Dodge Viper comes just one day after the automaker issued a massive recall of 360,000 SUVs and pickup trucks due to a rear axle issue.
Advertisement

Chrysler has announced the recall of model-year 2003 and 2004 Dodge Viper vehicles due to an airbag flaw. Specifically, certain vehicles contain a faulty airbag control module, which may fail causing the front airbags and/or seatbelt pretensioners to inadvertently deploy. Such an occurrence could increase the risk of injury and the likelihood of a crash. The recall, which concerns cars manufactured from November 1, 2001, through June 30, 2004, affects a total of 3,660 Vipers.

Dodge Viper owners that have incurred out of pocket expenses in relation to the recall will be fully reimbursed by Chrysler. The automaker only asks that owners send the original receipts and/or proof of payment to confirm the expense.

Chrysler’s airbag recall stems from an investigation, which identified 87 reports of inadvertent airbag deployment. Of the 87 reports, 50 resulted in injuries. The injuries included cases of cuts, bruises and burns to the upper body. Forty-two of the 87 incidents involved the driver frontal airbag, while the remaining 45 involved both the driver and frontal airbags. All of the incidents involved the airbags deploying without a crash.

Chrysler’s recall of the Dodge Viper comes just one day after the automaker recalled 360,000 SUVs and pickup trucks to fix a rear axle problem. The recall concerns 2009 Dodge Durango and Chrysler Aspen SUVs, 2009 to 2011 Dodge Dakota and 2009 to 2012 Dodge Ram 1500 pickup trucks. Thursday’s recall is an expansion of a September recall involving 44,000 pickups.