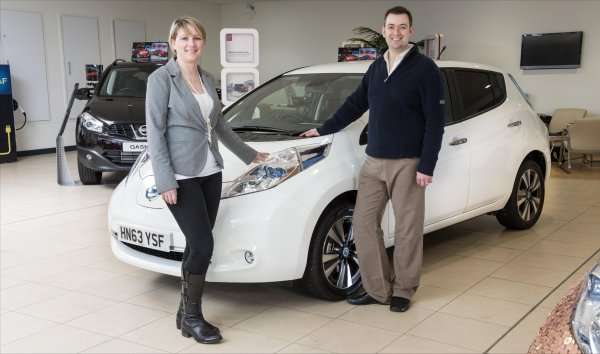 Yesterday, we reported on the 99,999th Nissan LEAF sold to a woman in Virginia. So where did the 100,000th milestone electric car go?
Advertisement

When we reported yesterday that the 99,999th Nissan LEAF had been sold to an unlikely buyer in Virginia, it immediately brought up the question: so where did the 100,000th LEAF go?

After all, 99,999 is not really a rounded, milestone kind of number. Right? It's kind of, well, arbitrary. 100,000, though, that's an even number with lots of nice, easy to digest zeroes and seems to have "milestone" etched into it naturally.

Well, for that one, we have to go all the way to the United Kingdom. There, we find a nice British couple from Hampshire named the Garners (above), who purchased a Nissan LEAF Tekna in white. Brett Garner is a dentist and became interested in the LEAF in the same way many other owners have: he saw someone else with one and asked them about it. His friend told Brett not about the car's zero-emissions technology or electric drivetrain, but about the car's versatility, people-moving skills, and low cost of operation.

All things which clicked with Garner, who then had to convince his wife. He did that by first showing her the low cost of maintenance and fuel, which would significantly change their income when factoring in the savings from his 50 mile daily commute.

They purchased the car and had British Gas install a Polar charging point at their home. It was then that they found out that they were the ones who'd purchased the 100,000th Nissan LEAF sold globally.

The dealership, obviously excited to be the ones to have reached this milestone for Nissan, spent a week decorating a Nissan LEAF with 100,000 British coins of three layers to display in their showroom and commemorate the milestone. Half the car is covered in Sterling and the other in Euros with the word ‘LEAF' highlighted by the use of three layers of coins.

The car is currently on display at that dealership, Martins of Winchester.