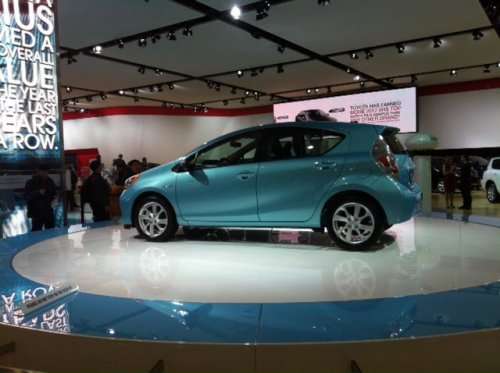 The Toyota Prius C hit the Detroit auto show this year with a bang. The tiny car is entering the market as the most fuel-efficient car in Toyota's Prius line. The company has announced release dates for North America as well as details on the C's specifications.
Advertisement

Toyota first launched its hybrid car line in 1997 and since then has managed to brand Prius as being synonymous with "hybrid" in most people's minds. After three million cars sold, it's obvious that the market for hybrids is there, so Japan's largest automaker is continuing its development. Last week in Detroit, the company showcased the new Prius C, the smallest and most fuel efficient of the Prius line's offerings to date. It's expected to have a price tag under $20,000, making it the cheapest in Toyota's hybrid offerings as well.

The C was shown at the North American International Auto Show (NAIAS) and immediately got the attention of electric vehicle enthusiasts and Prius fans around the country. One thing was missing, though: a release date. Toyota was showcasing the Prius C as a 2012 model, but the car was not available in showrooms. That date has now been announced.

Toyota Prius C will come to North American showrooms in March and will indeed have a price tag of less than $19,000 for the base model. The little C gets 53mpg in the city and 46mpg on the highway (combined 50mpg) by EPA numbers. The C is 19.1 inches shorter than the standard Prius and weighs 542 pounds less, which is where most of that fuel savings comes from.

More changes include a smaller engine (1.5L instead of 1.8) and a smaller electric motor (54kW rather than 80kW), which are reasonable thanks to the car's lighter weight. These put out a total of 99 horsepower at 82lb-ft of torque. This won't give the Prius C any record-setting 0-60 speeds, but it does mean high economy and enough power to do what most people do in a compact this size everyday: drive around town.

Like the rest of the current-generation Prius family, the C has three drive modes: Normal, Eco, and EV. Normal driving is just that - driving around mostly using engine power and getting the lowest economy. For highway driving, this is the norm. In Eco mode, the car balances economy and performance by utilizing the electric motor as a booster for early acceleration from a stop and puts the engine in stop-start mode so it doesn't idle. In EV mode, the car drives fully on electric power (up to about a mile at sub-25mph speeds) until the batteries get low enough that it needs to recharge, thus causing the engine to start up.

The Prius C comes standard with several color options (many are bright and flashy like "Habanero" - above photo is "Summer Rain Metallic"), a basic black interior, 15-inch wheels, and a lot of sound system connectivity options. An auxiliary audio jack, USB port, built-in iPod connectivity, and hands-free phone connections are also standard. A large-screen multi-information display is also standard in all Prius models as are all of the Toyota safety features usually included in today's cars (airbags, anti-lock, etc).

Options for the Toyota Prius C mostly center around the audio system, which is where most of its intended younger audience pays for upgrades. The car is expected to sell well in its segment, but we'll know for sure how well starting in March.