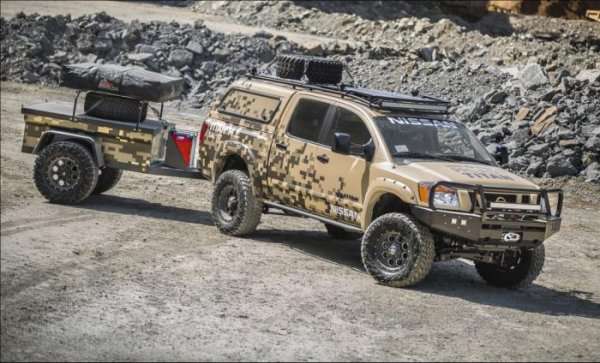 The final phase of Project Titan is underway and the Nissan Titan truck is almost ready for its foray into the Alaskan frontier with its wounded warriors.
Advertisement

The crowd-sourced, custom-made Project Titan truck has completed the final phase and will soon be on its way to Alaska where it will carry two special Wounded Warriors from the Wounded Warrior Project on an Alaskan adventure they will never forget. Most of the items added to the Nissan Titan Pro-4X for this build were selected via fan voting on the Project Titan Facebook page.

The project began with a 2014 Titan Crew Cab Pro-4X to which Nissan planned to add things in ten specific areas of customization. They found several options for those areas and posted each to Facebook to ask for votes from the world at large. Fans of Project Titan and the Wounded Warrior Project then voted for each stage of the truck's build, giving direction as to which items to add or leave off.

DON'T MISS: Here is How a Nissan Titan NISMO Would Look Like

Starting on the outside, a "Recon Titan" wrap with a digital-camouflage design pays homage to some of the most capable vehicles in the military. A NISMO cold-air intake and Borla cat-back exhaust system open up airflow on both ends of the Titan's Endurance® 5.6-liter V-8 engine. the hazardous Alaskan landscape is handled by 18-inch Fuel Revolver D525 wheels wrapped in 35-inch Nitto Trail Grappler M/T tires. Come nightfall, Bulldog LED Lighting illuminates the way, while an ARB Deluxe Bull Bar provides high-quality protection to help conquer the unknown.

Now Iraq War veterans and wounded Warrior Project Alumni David Guzman and Kevin McMahon will embark on an adventure into the Alaskan frontier. They will trek over mountains and through valleys in the specially-outfitted Titan where they are likely to encounter the first snow of the season as well as the wild game and beautiful scenery that marks Alaska in the fall.

Nissan will be there to document the endeavor on its YouTube channel. After watching the build videos below, head on over to the Nissan Trucks Facebook to follow the adventure.