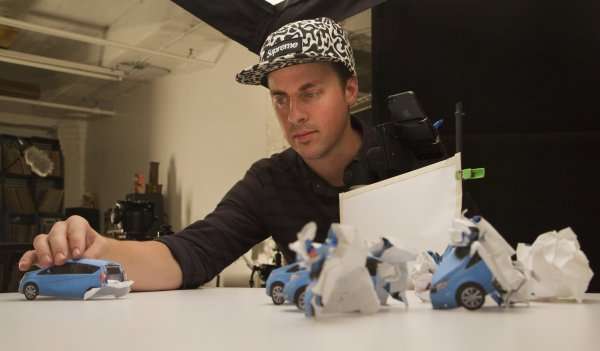 The video is just a few seconds long, but it was so well-made and painstakingly crafted that it became a winner in Nissan's Your Door to More video contest. Here's how it was done.
Advertisement

When Nissan released details for Vine users to enter a video contest to showcase their passions and the all-new 2014 Versa Note in short films, Andrew Jive of Brooklyn, New York was primed to enter. With parameters of only six to fifteen seconds and his own creativity, he made a cool short video featuring the Note made entirely out of paper.

"The more you make it look like there is a special effect there, the more sort of wow factor and people want to dissect it and figure out the puzzle before they move on the next great amazing Vine," said Jive.

With patience, a lot of re-takes, and eight hand-made paper models of the Versa Note, Jive worked his magic to create a video for the contest. Taking the models in stop-motion, Jive "..just cut it at different lengths and crumbled it up, so it actually looks like a crumpled piece of paper is turning into a car."

Two other winners, Matt Fogarty of Pennsylvania and Haley Yuen of New Jersey also won the contest. The three videos were combined together to make a 45-second national television commercial that aired during the Florida State v Clemson college football broadcast on October 19th. Each of the contest winners received a $1,000 Amazon gift card.

"I'm pretty excited to see where Vine goes. I compare it to TV producers on MTV in the 80s. They changed the way we watch television, which changed the way companies advertised. I could see Vine doing that in the next two or three years, showing the Internet is where advertising is at," said Jive.

Check out this two minute video showcasing the process Jive used to make his winning entry: