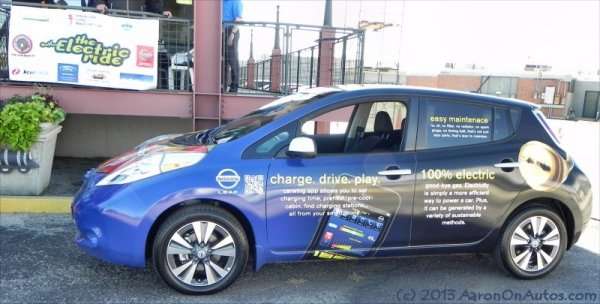 Nissan's Carlos Ghosn says the company will not make it's 2016 electric vehicle sales goals as the federal government and California begin altering their support for electric vehicles. Maybe the answer to our transportation needs lies somewhere else.
Advertisement

Renault and Nissan CEO Carlos Ghosn recently said that the companies would miss their combined 1.5 million electric vehicles sold by 2016 by a long shot. So far, Renault-Nissan has sold about 120,000 electric vehicles between them - most of those being the Nissan LEAF, of course, followed by the Renault Twizy, Zoe and Kangoo. At this rate, the companies will weigh in at around 500,000 or so EVs in 2016, missing their earlier projections by a factor of three.

Meanwhile, regulators in California are considering altering the zero emissions rules to end favoritism for plug-in vehicles so as to include other zero emissions technologies like hydrogen fuel cells. The California Air Resources Board (CARB) sets the standard for how the left coast deals with vehicle emissions regulations and nine other states generally follow their lead. This follows the Obama Administration's change of rhetoric from the $5 billion in loans and grants given to EV developers and builders early in his presidency to halting those loans and reversing an earlier negative stance on fuel cell development.

Automakers like Audi, part of the Volkswagen Group, are questioning why governments in the U.S. are so keen on only one basic technology - electric vehicles - when consumers so clearly prefer another - diesel. Auto sales figures clearly show that the current and near-future trend in automotive sales is towards diesel and electric hybrids as an alternative to standard gasoline, not plug-in electrification. Further, as I stated in a somewhat controversial article last year, most battery electrics being introduced to market in the U.S. are merely "California compliance cars" rather than actual vehicle launches.

Nissan's Ghosn says that the slow adoption of electrics is largely due to a lack of infrastructure, which he admits is growing in key markets like the U.S. and Europe at a slower pace than their somewhat optimistic numbers projected. The cost of the vehicles is also a factor, though Ghosn attempted to deny that point.

The Cost of Buying an EV
Without government incentives, EVs generally become out of reach for buyers interested in value for dollars spent. The equivalent vehicle in gasoline or diesel is usually far cheaper than its electric cousin and has more infrastructure (repair, fuel, etc) behind it as well as more known reliability background to boot. For the consumer, these are important points that, whatever your view of electrics may be, are what often drive purchase decisions. Few car buyers "do the math" that many EV proponents insist makes the electric car more cost-effective in the long run. Numbers which may or may not actually add up for the buyer anyway.

The automotive press has a love-hate relationship with EVs. We are told that we should love them for various reasons - usually for the "three E's": economy, efficiency, e-novation. The reality, after having driven most of them, is that they are often fun, will fit a specific lifestyle, but rarely deliver on the promised "economy" unless the buyer qualifies for all of the tax incentives used to promote them to the consumer - one reason leasing is generally more popular, by percentage of sales, in EVs than it is for other vehicles.

The price premium for an electric car, versus its standard gasoline counterpart in similar trim level, is often far higher than the fuel savings will be over the three years or so that the lease is active. For the Versa Note versus the LEAF - two highly comparable Nissan models - the price difference is about $12,000 if you remove the federal tax incentive from the LEAF. A comparably packaged Versa Note to the base level LEAF is about $16,800 versus the $28,800 base price of the LEAF, before incentives. Over three years, the EPA estimates that the Note will use about $1,550 in fuel annually (this assumes 15,000 miles per year in a 50:50 city/highway mix - even with all city driving, it's $1,783 annually). Simple grade school math does the rest for you in terms of payback time for that LEAF, if you get the electricity for free.

Wait, I Thought Obama Wanted EVs?
Well, not so fast. As with anything in politics, support for something is fickle and often tied directly to perceived public opinion and, like it or not, money. In this case, we can say that the Obama Administration's support for battery electrics is waning because public opinion (lack of sales, and scandals involving federal funding for them) coupled with lack of money incentive (with budgets ballooning, debut rising, and the public's unhappiness with both, giving away money is not kosher in D.C. right now) seems to have created a paradigm in which talking up electrics, from a political standpoint, is not going to boost anyone's ratings or support levels.

Granted, President Obama did mention electric vehicles back in July - at least his administration did - and the intervening few months have been rife with other problems slightly more pressing than whether or not EV sales get higher. Add to that the obvious return talking point of three Tesla Model S vehicles bursting into flames (regardless of the facts of how or why they did) and electrics become, well, a sort of political hot potato to be tossed on the counter to cool off while other things are put on the plate.

This will have big ramifications for companies like Tesla Motors, who amass CARB ZEV credits and then sell them to boost profits. When they cannot sell those credits, as recent Tesla losses indicate, their profits drop because the company still cannot make a profit on its vehicles - and likely won't for some time. Frankly, many of those ZEV credit sales were lost because the automakers that needed them now have compliance models in place and so no longer need the credits.

The change in rules will further hurt EV-only companies like Tesla (and by some extension, Nissan, since they also amass ZEV credits due to LEAF sales) and will help companies that aren't known for plug-ins, such as Honda, whose Clarity fuel cell car has been on the road for some time. Other companies like Hyundai, who also has a fuel cell vehicle on the road and no zero emissions vehicles, will benefit as well. Toyota could also benefit, given that a planned fuel cell vehicle launch in 2015 would make up for lack of production with their own plug-in Prius.

All of this fundamentally shifts the zero emissions automotive scene. CARB, however, is not incentivizing other alternatives to gasoline, such as diesel or natural gas, in the same way.

Is the Future A Mixed Bag?
Several of us here at TorqueNews have emphasized a future that is not all in one basket, as we are now with petroleum fuels. Instead, we see a paradigm that Ford seems to be embracing with their Power of Choice powertrain options. That future involves one vehicle model being offered with multiple powerplant sources.

Consumers can choose which best fits their lifestyle, needs, and availability. Mixtures of each could also be offered, since most gasoline and some diesel engines can be made to also work with natural gas as a dual or bi-fuel option and a plug-in electric hydrogen fuel cell hybrid is not out of the question either. Even the fuels themselves can come from multiple sources, most of which are renewable.

That sort of future, which takes the eggs out of one basket, is possible given the huge number of vehicles being sold in North America today. Throw in that many of these vehicles could be sold globally with those powerplant options as well, and you have a realistic scenario.

What do you think? Is the future a spread, now that it's obvious that EVs are not going to dominate the market anytime soon?

Rob MacGregor wrote on November 18, 2013 - 2:19pm Permalink
As our business sells electric trucks, I tell people to forget about the up-front cost and consider the full cost of ownership instead. Moving from a gas or diesel guzzling dinosaur drinking old dinosaurs, into an electric vehicle demonstrates very significant operating cost savings. Try this cost saving calculator: http://www.viamotors.com/vtrux/calculator/ Speaking from my own experience, since driving my Mitsubishi iMiev, I have not been to a gas station since June. I have saved about $4000 in fuel and maintenance, at a cost of $17.00 per month, on electricity. I could reduce this further if I charged at free public stations. Add to this the fact that my household had reduced our carbon footprint and taken our transportation GHG emissions to zero, I feel good about doing my part in getting my world back to green. Electric vehicles should be looked at, not as a threat, but more of a solution to a problem as well as the testbed for the next possible step - fuel cells. Remember that fuel cells require electric infrastructure in a vehicle to make it work. Think and stink all you like, rhetoric will never convince me to go back to fossils feeding on fossils.
Aaron Turpen wrote on November 18, 2013 - 3:57pm Permalink
One: there's a reason VIA Motors trucks aren't even a blip on the market. COST I can buy a Ram 2500 CNG for less than your plug-in and still see cost savings over time from fuel and have a more functional truck with zero range anxiety (dual-fuel). Next year, I'll have a choice of a 1/2 ton too. Two: No such thing as "zero GHG." Emissions are to be had somewhere unless you can guarantee that 100% of the time you're fueling from non-GHG electric generation, which is very unlikely. If you are, and it's owned by you, you have to factor in the cost of that generation and infrastructure as well. Three: My point was that electricity is NOT the only option for future automotive and that fuels don't have to come from petroleum (or "fossils" as you incorrectly call them). There are many ways to harvest methane, many ways to create ethanol/methanol, lots of sources of diesel-like oils, plenty of ways to get hydrogen, and lots of other fuel options besides all of those. Four: How logical would it be for us to drop one "all eggs in one basket" paradigm (petroleum) for another (electricity)? Isn't diversity a better option?