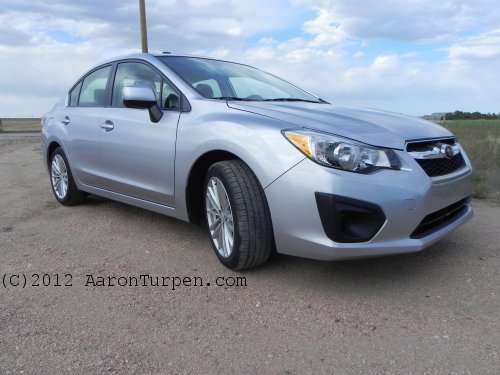 What is PZEV anyway?

It doesn't have anything to do with peace or electric vehicles. We'll dissect a Subaru Impreza Premium PZEV for answers to this conundrum of marketing, science, and politics. Mostly politics.
Advertisement

It's likely you've seen the term "PZEV" on a vehicle recently. You might have even assumed it was some kind of hybrid or green vehicle. If you guessed the latter, you'd be close.

The "EV" in the term PZEV doesn't stand for "electric vehicle" as we've come to know the acronym. Instead, PZEV stands for Partial Zero Emissions Vehicle. It's a sort of mashup category of cars created almost entirely through politics.

Recently, the question came to the fore when I was test driving a 2012 Subaru Impreza Premium PZEV. The Impreza features a nice, shiny little symbol on the trunk with PZEV sprouting a leaf. When talking to people about this neat little car, they inevitably assumed that this symbol meant it was a hybrid-electric of some kind. After explaining what it really meant a few times (often to dumbfounded expressions), I realized that most people aren't really familiar with the term or what it's for. And many find it incredulous once they do find out about it. At least, people who live in Wyoming do. I didn't ask anyone in Jackson Hole (Wyoming for "California") about it, honestly.

What is a PZEV then?
A partial zero emissions vehicle has a PZEV engine or drive train that meets or exceeds specific requirements set forth by the State of California. It's almost 100% politically-created since the criteria have as much to do with warranties and getting around other California mandates as they do with emissions requirements.

The Subaru pictured, for instance, is a compact car that gets 27mpg city and 36mpg highway and sports all wheel drive - which where I live is a pretty good package all together given the amount of highway and semi-offroad (dirt, gravel) driving we do out here. For all that, the Impreza PZEV puts out 90% less emissions than its equivalent counterpart, meaning it meets federal super ultra low emission vehicle (SULEV) standards.

(Not just super, but super ultra.)

That alone doesn't make it a PZEV, though. To meet that distinction, it must be a SULEV and have zero evaporative emissions from its fuel system and have a 15 year/150,000 mile warranty on its emission control components. Having all of those things makes a car PZEV special.

Who came up with this idea?
Why the California Air Resources Board (CARB), of course - our nation's top think tank of acronym-laden vehicle requirements (A-LVR) and politically correct environmental mumbo-jumbo (PCEMJ). Why did CARB come up with PZEV? Why.. because another mandate they laid down, this one involving the term ZEV, was impossible for many automakers to meet. So PZEV became a compromise.

You see, not long ago, the out of touch with reality, but very environmentally conscious board members at CARB decided that all auto manufacturers should be required to produce a zero emissions vehicle (ZEV) or else lose their ability to sell cars in California. After much discussion, in which several professors of automotive design and never-had-a-real-job engineering espoused the wisdom of this approach, the board approved the idea. When auto makers got wind of this, they complained.

The complaints got even louder when TZEV (transitional zero emissions vehicles, formerly AT-PZEV or Enhanced PZEV) vehicles were not included in this, but were given a special category all their own that would allow them to be transitional towards the ZEV requirement. After a lot of explanation, mostly using single-syllable words, to the CARB people, automakers were able to convince them that you can't just take any car and throw batteries in it and have it work right.

Of course, just creating exemptions wasn't easy or simple enough, so CARB had to come up with a complicated scheme. They'd just returned from an important conference in which Al Gore explained carbon credits and thought the plan a great one, so they adopted something just as convoluted for ZEVs. So an automaker that can amass enough ZEV credits to match a percentage of the sales they have in California can keep selling cars in California and if they happen to amass extras, they can sell those to other automakers that otherwise might not have made their ZEV credit requirements for the year.

In this way, the CARB members could continue to claim that they are helping the environment and somehow creating green jobs and manufacturers can continue selling the SUVs and crossovers that consumers really want just by getting those not rich enough to buy a Tesla or a Leaf to buy cheaper PZEV cars instead. In the end, it all worked out for everyone and only required the slaughter of an additional 100,000 or so trees to keep the paperwork flowing, resulting in the addition of a handful of green jobs because someone had to be hired to do all that wood chopping and paperwork filing.

Meanwhile, perfectly good cars like our little example Subaru Impreza Premium PZEV are sold with tax breaks in some states (of confusion) like California and consumers still get a perfectly good compact car capable of going to the lake on the weekend. It might not be as fuel efficient as it could have been were all those extra emissions compliance things not added in, but that's the price we pay to add new green jobs to the economy and ensure that the hundreds of millions spent by California taxpayers to keep CARB functioning aren't wasted on things like fixing the state's budget problems or improving schools.

Where the incredulous looks come in..
After explaining this to people, I usually got looks of disbelief. In a place where there is no state or county level income tax (and thus, gasp, no "rebates" for politicians to dangle) and where "mandates" are associated with alternative lifestyles; and where (despite the lack of regulation) we can still, somehow, see a lot more stars at night than most anyone else.. it's hard for people who live like that to understand the machinations of modern, sophisticated places like California where the regulatory rule of God is handed down in minutest detail to control life's every moment. You know, we being so backward and all.