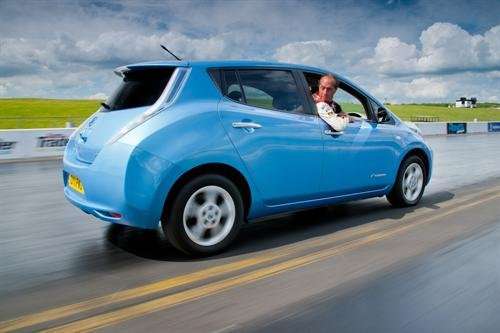 The LEAF set the record for speeding in reverse at the Goodwood Festival of Speed thanks to stunt driver Terry Grant.
Advertisement

Nissan LEAF owners now have bragging rights beyond just the fact that their car is all electric. It's now a record holder for speed too!

This weekend at the Goodwood Festival of Speed in Switzerland, professional stunt driver Terry Grant raced the Nissan LEAF into the record books - first setting, then beating his own record five times. He covered a distance of over a mile in the LEAF at a record-setting 55mph (average) in 1 minute and 37.02 seconds.

Sound unimpressive? Look at the photo of Grant setting a record. Notice he's doing it in reverse.

That's right. The records set were for speed over a 1.6km distance in reverse. Let's see you get your Mustang or Alfa Romeo to go 55 miles per hour in reverse. Go ahead, try it. Since most electric vehicles (EVs) like the LEAF have no gearing, they can go about as fast in reverse as they do forward.

Nevermind the impressive amount of control Grant had to have to keep the car straight for over a mile. Not once, but five times in total.

The record-setting is part of Nissan's social media campaign, The Big Turn On. The campaign is meant to spread the EV message across Europe using Internet social channels in an effort to get 1 million people switched on to electric driving in 100 days. This goal was met 15 days ahead of schedule on June 21st.

The LEAF now joins other Nissan vehicles holding records set at Goodwood in this and previous years. The LEAF is also the record holder for fastest uphill for an EV while in its special NISMO RC configuration. The Nissan Juke holds the record for going uphill on only two wheels (a record also set by Grant, but last year). Finally, this year the Nissan GT-R Track Pack production race car took part in the Supercar Run and was driven by race driver Michael Krumm of the Nissan GT-R team. Debuting at the Goodwood Festival was the Juke Nismo, coming to showrooms in 2013 as a larger crossover version of the Juke compact SUV.