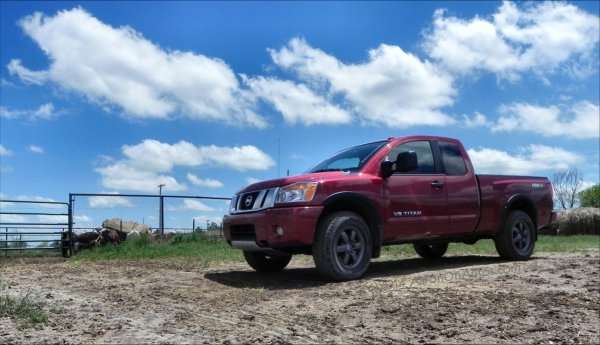 Nissan is clearly targeting Chrysler with the 2016 Titan Diesel

The 2016 Nissan Titan Diesel, likely to unveil in Detroit this January, is aimed at a specific part of the pickup buying market and shows that Nissan is clearly targeting Chrysler's market share.
Advertisement

Market moves and the upcoming showcase of the 2016 Nissan Titan, especially in its diesel form, as well as the quiet downplay of the obvious upcoming changes to the smaller Frontier pickup truck, add up to something. Throw in a few other details and it becomes clear that Nissan is targeting Chrysler's market share.

Chrysler has a problem. That problem is their inability to sell cars in the U.S. Specifically fuel-efficient small and midsize cars. Right now, Chrysler's Corporate Average Fuel Economy (CAFE) is one of the lowest in the nation because their sales are primarily in trucks, sport utilities, and sports cars. This is not to say that they aren't fully aware of this and working hard to change it, of course. We recently drove the 2015 Chrysler 200 and had earlier driven the Dodge Dart and were impressed with them both, but so far, consumers aren't flocking to Chrysler for small vehicles. It's going to take a lot of long-term marketing to change that consumer mindset, which seems to view Chrysler, Jeep, Ram, and Dodge as the go-to brands for not-so-fuel-efficient SUVs and trucks.

Seeing weakness, Nissan seems to be aiming to take some of Chrysler's market share, specifically in the pickup truck arena. The new Ram EcoDiesel is a great pickup truck with a lot going for it. Our brief time in it showed it to be an impressive truck with a lot of market potential. So far, it's selling well in its first weeks on the market. It's powered by a 3.0-liter V6 turbo-diesel engine, which is very similar in size and output to the diesel showcased for the Nissan Frontier Desert Runner prototype last year.

Meanwhile, the planned diesel offering for the big 2016 Nissan Titan Diesel will be a huge V8 Cummins outputting over 300 horses and around 550 lb-ft of torque. A massive set of numbers (read the details we have so far here and here). That plus a lot of other changes hinted at for the new Titan, which will include a more "contractor grade" lower-end offering and trim level changes, all seem to tell us that the new Titan will be far more marketable than the current, dated pickup truck, whose sales have been faltering for some time now.

Meanwhile, let's look at some other happenings at Nissan. First, their small car sales are excellent and have been almost across the board. The Altima, Versa, Juke, and others are seeing solid growth and high sales numbers. Similarly, their midsize and large SUVs are doing well. Overall, Nissan has a powerful lineup of model offerings to aggressively gain shares in the North American market.

Next, we look at who's running the show. Diaz, a former Ram Truck and Chrysler executive, is now a top dog at Nissan. He made the move to Tennessee just before the Titan was revealed to (finally) be going through a major revamp - one that, we've learned, is basically from the ground up with little of the old truck remaining. Coincidence?

Putting the bacon bits on top of this salad, we see CEO Carlos Ghosn clearly demanding that Nissan grow, and fast; and do so in the American market specifically. More bits come when we look at the huge amount of capacity and flexibility Nissan has created for its manufacturing here. Then we get our ranch dressing when we look at commercial vehicles and how fast and hard Nissan hit that market with its NV2500 and NV200 vans and the very open-ended way they've talked about getting heavier in that arena.

For Nissan to take more of the American market, they'll need to target every one of the segments it has and so far, they're doing just that. With few exceptions, Nissan has become a dominant figure in all segments but two: full-sized pickup trucks and heavy-duty commercial vehicles. The latter will come sometime in the near future, we think, as everything is falling into place to allow Nissan to get into HD vehicles. The former is coming fast thanks to the Titan, which will be Nissan's biggest reveal next year and will likely take center stage for months in aggressive marketing just before it enters showrooms.

If the new 2016 Nissan Titan is all its expected to be, Chrysler may have a lot to worry about.