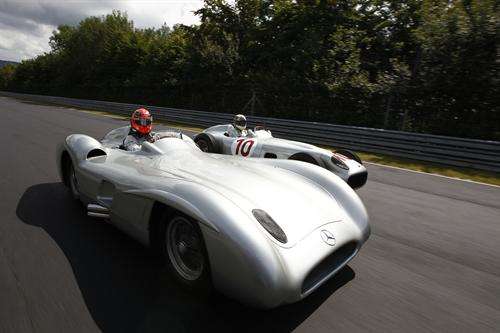 The legendary Silver Arrow will return to the Nordschleife, driven by seven-time F1 world champion Michael Schumacher on May 19th, marking the first time since Juan Manuel Fangio's victory in 1954 that a modern F1 Silver Arrow has been on the Nordschleife.
Advertisement

The last time a Silver Arrow was on the Nordschleife portion of the Nurburgring it was driven by Juan Manuel Fangio in 1954, a driver whose racing career with Mercedes-Benz included eight wins on the track in all, one of which was on that day in August of 1954.

On May 19, current Formula One legend Michael Schumacher, who holds several records and seven wins himself, will take a 2011 Mercedes AMG PETRONAS F1 W02 as a thank you to his fans. The demonstration lap on the Norburgring's Nordschleife will mark the first time a Silver Arrow has done that run since Fangio's win in 1954. Pictured here is Schumacher in the same Mercedes-Benz Silver Arrow Stromlinie W196 that Fangio used in 1954-55.

The Silver Arrow first had an outing on the Nurburgring in 1934, long before the Formula One Grand Prix began there in 1950. The International Eifel Race was where the Silver Arrow was born, having gained its name from its bare metal skin. In order to make weight requirements, mechanics had spent the night before the race stripping off the white paint that had adorned the car in order to pare down a few ounces. When Manfred von Brauchitsch won that debut race for the W25, the legend of the Silver Arrow began.

Schumacher retired from F1 last year after the Mercedes AMG PETRONAS race. He continues on as a brand ambassador for Mercedes-Benz, which began with the new Intelligence Drive safety and convenience system he helped introduce.

“I have a lot of fond memories of the Nürburgring and am really looking forward to giving fans and friends from my home town of Kerpen, which is quite close to the Nürburgring, something to remember as they see me drive by," said Schumacher in a statement. "But it will be a fantastic experience for me too, driving along the Nordschleife in a state-of–the-art Formula 1 Silver Arrow, particularly in view of the fact that the Silver Arrow’s legend began here. Posting a lap in a modern Silver Arrow on the most beautiful and most testing circuit in the world, what a brilliant mix – it’s every motor racing driver’s dream!”