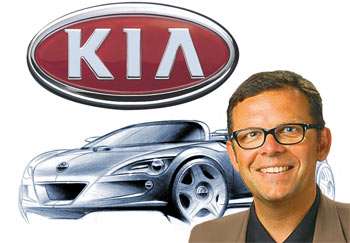 Peter Schreyer, a Bavarian, has been Kia's Chief Design Officer and was the man behind the transformation in the company's design cues, including the "Tiger-nose."
Advertisement

Shreyer joined Kia in 2006, turning the brand's name around in a few short years to become one of the most-recognized vehicle styles on the market. He's now the first non-Korean to hold the post of President in Kia's corporate lineup.

The new president plans to stay committed to continuing the company's design-led development. During his time at Kia, Shreyer transformed the look of some of the company's best-selling vehicles, including the new Sportage, the cee'd family and other models available in the South Korean domestic market, as well as the Optima, K7 and Quoris. He was also behind the Picanto and Rio.

In 2013, the Carens will be the final vehicle with which Shreyer had hands-on design work. It will unveil early in the new year and will be the first sporty model in the cee'd lineup for domestic Korean sales.

Shreyer was formerly at Volkswagen, where he is best known for his work on the Audi TT, A3 and A6 in the late 1990s as well as his influence on the Volkswagen New Beetle, Golf, and Eos. His first taste of design with Audi, however, was in 1978 as a student at the Munich University of Applied Sciences, where he'd begun studies in 1975. Through that work with Audi, the young designer won a scholarship to study at the Royal College of Art in London from 1979 to 1980. He then began working at Audi in 1980 in interior-exterior conceptual design. In 1991, he came to the USA to work in the company's design studio in California. By 1993, he was in Volkswagen's exterior design department, still largely working with Audi, winning several accolades and awards.

In 2006, he left VW to take the post of Chief Design Officer at Kia and moved his wife and two children to Seoul. At that time, Kia was focusing on the European market and knew that without leading-edge design, they would not prosper there. Schreyer has overseen design operations at Kia from all four of its centers, including Frankfurt, Los Angeles, Tokyo and Namyang.

His first showing was in 2007 at the Frankfurt Motor Show, where the company introduced the Kee concept vehicle with the signature "Tiger Nose" they have now become known for. At the time, Schreyer said "The front of a car needs this recognition, this expression. A car needs a face and I think the new Kia face is strong and distinctive. Visibility is vital and that face should immediately allow you to identify a Kia even from a distance." By 2009, the look was being incorporated into all of Kia's redesigns.

Schreyer has won the Design Award of the Federal Republic of Germany (2003), an honorary doctorate from the Royal College of Art in London (2007), and was named one of Top Gear Magazine's Men of the Year in 2001.