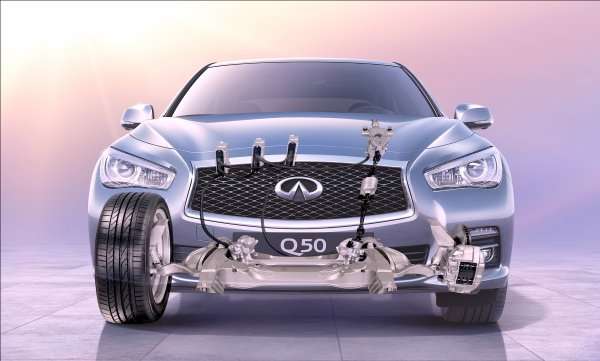 The LA Auto Show is all about showcasing the best and brightest and for Infiniti, it's about showing off a quarter century of innovative firsts. Here are the best of their best.
Advertisement

Infiniti has been a company that brings firsts and bests to market. As the premium brand of Nissan, of course, it enjoys the ability to bring expensive technologies to vehicles before they proliferate down to the lower-cost, non-luxury offerings in the line. Many of the technologies it has brought to market are now commonplace.

Here is a selection of technologies that Infiniti has either been a first with or introduced as standard before others have.

RearView Monitor
The back-up camera, which Infiniti called the "RearView Monitor" enter the first of the company's vehicles in 2002 in the Q45 sedan. Soon, backup cameras will be mandated in all vehicles and are currently in vehicles from the most entry-level price point on up and are considered standard equipment in premium-level offerings.

Around View Monitor
This is, of course, now a part of the Nissan nomenclature as a common option in nearly every vehicle the company sells. Infiniti first introduced it in 2008 as the first virtual 360-degree, bird's eye view of the vehicle when parking. Something similar will now be a feature on the best-selling vehicle in the U.S., the Ford F-150, as of 2015. We can soon expect it to be considered common in automotive generally. We tried it in the 2014 Nissan Rogue.

Lane Departure Warning
Back in 2005, Infiniti pioneered this technology by introducing it in the FX. It soon became the Lane Departure Prevention system in 2008, which not only warns of lane departure, but actively prevents it.

Predictive Forward Collision Warning
The world's first system that can look ahead of not only the vehicle, but the vehicles ahead of it, this system was introduced in the 2014 Q50 flagship sedan and alerts drivers to changing conditions that they may not be aware of and that the driver ahead of them may not have yet reacted to. We talked more in-depth about this when the Nissan Murano won an award for it.

Direct Adaptive Steering
Also called "steer-by-wire," the system was introduced in the 2014 Infiniti Q50 sedan, transmitting steering inputs electronically and instantaneously for a quicker, precise response and with full customization.

These and other technologies are being showcased in Infiniti's booth at the LA Auto Show as it highlights its 25th anniversary.