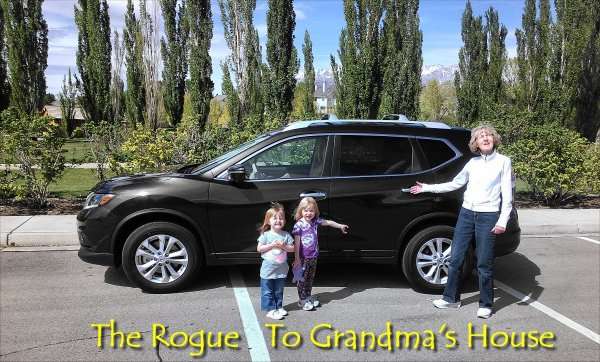 My family piled into the all-new 2014 Nissan Rogue and made a road trip to my mother's in Utah through some of the most beautiful country Colorado and Wyoming can offer. We loved the Rogue, but loved the trip even more.
Advertisement

My mother turned 80 the day after Christmas and has only spent time with our two children, girls aged 3 and 4, once. So a trip to see her was definitely overdue. To make an 1,100-mile round trip like this with a family of four and all the gear that toddlers imply meant we needed a fuel-efficient family machine. Our Mazda5 minivan is getting on in years and has been nicknamed the M300D because everything that breaks seems to cost about three hundred dollars to fix.

So I thought "Hey, I'm in the automotive press. Someone will give me a car for this trip!" Naturally, I reached out to my good friends at Nissan. And so the Rogue to Grandma's House was born.

The 2014 Nissan Rogue arrived at our doorstep on Monday morning in a beautiful, deep green and in its top-fit SV package with all the techno-goodies that Nissan offers in this crossover. We assessed the vehicle and found the Rogue to have more room than expected (always good). So we packed up and left early Tuesday morning.

We planned to drive through Northern Colorado and some of the best scenery in the Western U.S. We passed through Cheyenne, over the hill to Laramie, and then turned southward into the Bitteroot mountain range and Medicine Bow National Forest. Crossing into Colorado, we turned West again onto U.S. Highway 40.

For its part thus far, the 2014 Rogue had proven itself to be capable of climbing hills with a full load of passengers, getting good fuel efficiency while doing so. We averaged about 25 mpg, far shy of the 32 highway it's rated for, but very good considering that at this point, everything had been uphill.

Once on US40, we drove through the changing Colorado landscape with interest. The road passes through the Arapahoe National Wildlife Refuge, the Routt National Forest, skirts Dinosaur National Monument, and more. Scenery changes from high country forest to green plains to scrub desert inside about 300 miles of driving. It's beautiful.

We passed Dinosaur and crossed the border into Utah, heading towards the booming oil town of Vernal. We stopped at the Vernal library for a late lunch so the kids could look at the dinosaur statues and climb on the big rocks that dot the park-like open area of the library's grounds. Then we kept heading west, passing through my old fishing grounds and down into Heber City, Utah. Down the canyon, we passed through the rain clouds and then smog into the valley where Provo and Orem, Utah are located. Happy Valley as the locals call it.

Little did we know that this was graduation week at Brigham Young University and graduation for Utah Valley College had just completed. It was a madhouse of traffic - worse than its already bad normal.

We made it to my mother's house, which sits right between BYU and UVC, of course, and unpacked to settle in after kissing our hellos.

For several days, we spent time with friends and family in Happy Valley. We visited every park within ten miles so the girls could try out all of the spiral slides in existence, went to a small dinosaur museum (they're toddlers.. dinosaurs are tops), fed ducks and turtles on BYU campus, and were more than impressed with the versatile third row option our Rogue had and the 2014 Rogue's huge complement of driver's assistance technology. The AroundView monitor is perfect in tight city parking (and un-parking) situations, the tight turning radius and well-done Xtronic CVT are seamless, and the lane departure and blind spot warning systems are excellent in a city as busy as Provo is during BYU graduation.

Speaking of which, the scenery was fun as well. If you're a car nut, anyway. Most of my family were unimpressed with the packed streets and parking spaces, but I enjoyed seeing cars like Mercedes-Benz C-Class sedans, Lexus vehicles of all descriptions, and even a Tesla Model S sharing parking spots alongside Geo Metros and beaten-down, but still roadworthy (we assume) Tercels. It was fun to see the mix of vehicles and the drivers that pilot them. In one case, I even noted a 60+ year old man driving a brand new Subaru WRX STI with its huge spoiler followed by a girl who didn't look old enough to drive, behind the wheel of a huge-looking new-generation Camaro.

Eventually, of course, things have to finish and goodbyes have to be said. We did that on Saturday morning, after packing "a few things" my mother thought we should have (which translates to enough stuff that it outweighed the driver and passengers in our car). We got it all to fit in the huge cargo area of the 2014 Rogue, though, and headed up the canyon towards Heber City.

To make the return trip faster, we decided to take Interstate 80 across Southern Wyoming. I'm more familiar with this road than I'd care to admit, since I spent a lot of time on it as a truck driver back when. Frankly, it's some of the most boring country you can drive through outside of Kansas. The up side is that in early spring, it's as green as it's going to get and much prettier, thanks to the washing rains that frequent the area, than it is at other times of the year. The antelope are out and about in the low country, big rigs don't tend to get bunched up since weather is rarely affecting their drive times, and Little America still has fifty-cent ice cream cones at the halfway point of the drive to our house.

In all, we put 1,100 miles on the 2014 Nissan Rogue and had a great time doing it. Nissan deserves a lot of thanks for helping us make this trip, as does the nice trooper in Colorado who pulled me over for speeding and talked about the #Roguetograndmas hashtag live blog instead of writing me a ticket.

Once in a while, we get to do something fun in a press loan vehicle. Sometimes it's going to the race track, other times it's climbing mountains and bouncing off rocks. This time, it was a Rogue Trip to Grandma's.