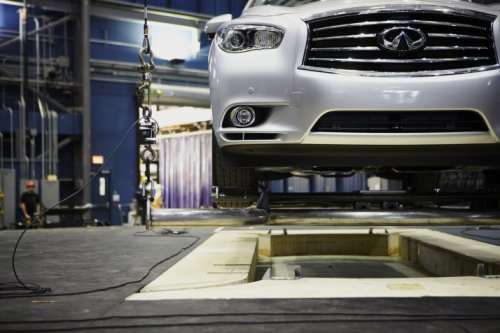 What do you get when you combine the world's most well-known modern dance troupe with the world's least-known luxury car brand? An 11 minute live streaming event from Montreal to promote the Infiniti JX.. through dance.
Advertisement

Cirque du Soleil is known for combining high-flying circus acts with modern dance and costuming. Infiniti is known for making luxury cars. Together, they will come together on March 29th to make 11 minutes of forgettable history on a live stream from Montreal, Canada.

As we all know, high art is always thanks to corporate sponsorship. I think Monet wrote that in his diary.

Having seen and been witness to the Infiniti JX personally, I can say it is a very well-designed vehicle. It has all of the elements of a market changer for its segment. That doesn't mean that it's high art, though. Just good design.

Also having seen Cirque du Soleil in person, I can say that while it's generally entertaining, even to an uncouth American from Wyoming like myself, it's not exactly what I would call "high art" either. Just entertaining.

Obviously, you should get out some salt because those two statements are coming from a guy who sees the pinnacle of vehicle design in things like an Oliver 70 or any 1940s Ford N-series; and for whom artistic greatness can be found in Iron Maiden and in watching the KillaCycle do 0-60 in under a second. Art is a relative thing, so for you, maybe the Daimler Smart is pretty and Picasso did something other than draw like a third grader.

Whatever your view, you have to be taken aback by the idea that Cirque du Soleil is going to be doing 11 minutes of promotion for the Infiniti JX. Honestly, isn't this a total what the zee moment? Aren't you a little bit curious about how this will play out?

If so, you can see it on a live stream, free of charge, on March 29 at 12pm EST. It will be on both the Infiniti Facebook and Cirque du Soleil Facebook pages. You can even participate in video Q&A with some of the people involved in this marriage of dance and crossovers after the show. I'll be sending in my question, which will look like "Err?!?" I may amend that to "Err.. WHAT WAS THAT?" depending on the performance. 12pm EST is a good time for me as it's about 10am and by then, I've had enough coffee to coherently articulate dumbfoundedness.

Here's a quick promo video for the event. It's mostly in French, since we all know that true art can't be done in English:

Tesla-Funded Research Reveals One of The Biggest Mysteries of EV Battery
Tesla Tesla Buyer Nets a Whopping $12,000 Discount After Asking for Reduction
END_OF_DOCUMENT_TOKEN_TO_BE_REPLACED