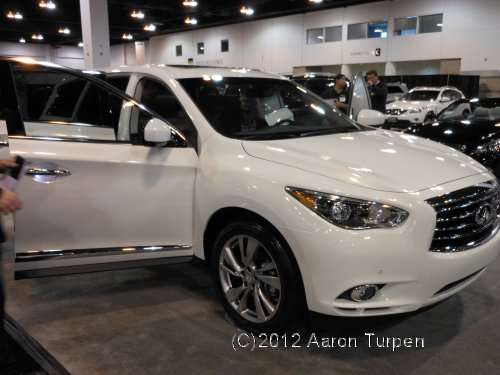 Infiniti shows off the 2013 JX crossover in Denver

The Denver Auto Show 2012 is full of great showcases of automotive design, including the all-new 2013 Infiniti JX crossover, which emphasizes style and flexibility in a crowded, luxury market.
Advertisement

Nissan's upscale brand, Infiniti, is working hard to dominate the heavy competition in the luxury crossover market. The Infiniti JX is its latest warrior in the ring, emphasizing style, sophistication, and flexibility.

The 7-passenger (or 3rd row) crossover market has a lot of contenders. Many vie for the luxury title, but will find themselves up against a heavyweight with the well-designed and very true-to-segment 2013 Infiniti JX, coming to showrooms in April. With safety features that are second to none, ease-of-access that goes above and beyond, enough power to get you there, and a starting price that will surprise many, the JX may put the competition on the ropes.

First and foremost, the 2013 JX is a family car made to carry up to 7 people comfortably, whether they be adults, toddlers, or anyone in between. Wide second doors give excellent access to the second and third rows with the second seats easily sliding far forward (even with a car seat in place) to allow unprecedented access, beating all but the sliding doors of a van for opening room. Behind that third row is a large amount of cargo space as well, adding to the flexibility of this crossover. The JX leads the segment in both passenger room and cargo space.

The 265 horsepower, 3.5-liter V6 engine has the umph to carry a fully loaded passenger cabin just about anywhere while the Infiniti Connection electronics will do everything but drive you there itself. The company's unique Infiniti Personal Assistant computer can remind you of appointments, find places on the map for you, or answer trivia questions to keep you occupied during a long drive. All under voice command, hands-free. Got teenagers? Then you'll love its ability to monitor speed and send you text message or email alerts when that speed limit is broken or the vehicle leaves a given geographic area.

Safety features go well beyond standard with Around View monitoring that detect moving objects and alerts the driver to potential hazards. Infiniti's unique Backup Collission Intervention system actually alerts the driver to danger behind the car up to the point of actively engaging the brakes and stopping the vehicle to prevent a collision. Cats everywhere will be thanking Infiniti for this one.

The crossover starts at $40,450 plus $950 destination and handling. The 2013 Infiniti JX enters showrooms at the beginning of April. It's a stylish, well-thought out family vehicle that has so many little perks to make everyday use easier that it's hard not to like this contender. Expect the luxury crossover battle to really heat up with this entry.