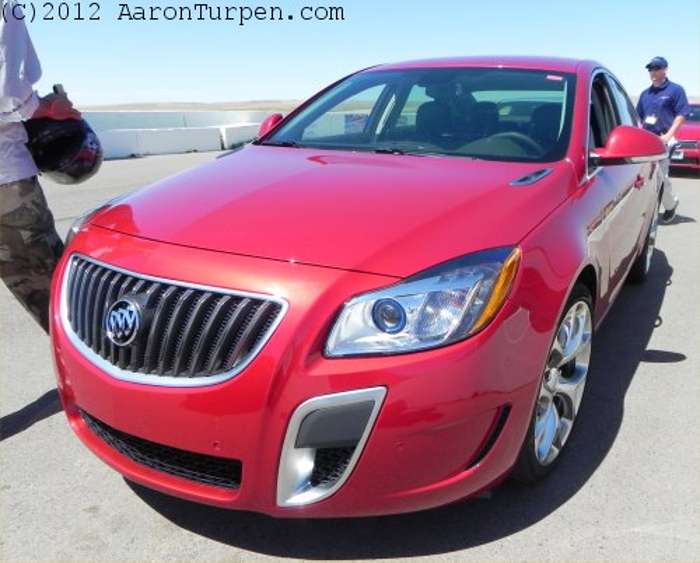 Grandma's car on the race track

Buick is working hard to shed the geriatric associations with its name and taking the Regal GS on the race track proved that they are serious about the effort.
Advertisement

Buick's new rebranding effort has been underway for some time and the General Motors brand has been working hard to shed its aged baggage and become younger, lighter and more nimble. The 2012 Regal's slogan is "Check your expectations at the door." I would suggest that you not do that because if you expect what I expected out of the Regal, you'll be humbled with delight.

One of the cars at the Rocky Mountain Drive Event in Denver, Colorado that surprised by its appearance, of all places, on a race track alongside monsters like the Audi R8, was the 2012 Buick Regal GS. I got into this car expecting to take a leisurely ride with grandma around the track, puttering around corners in comfort and (by the looks of it) style. I was half right.

The Regal GS delivers comfort and style in a big way. What surprises is that it also delivers in performance and handling. No, it did not outrun or out-corner the R8 or Mustang, but honestly, those cars wouldn't be comfortable as road trip rides or daily drivers like the Regal. On the other hand, the Regal was far from geriatric in its speed and agility.

On the first loop of the GT track run, I took it easy on the GS because of my preconceptions about the car. On the straightaway, however, I punched it hoping that GM had not skimped under the hood. The seat-pressing growl that came back at me was a shock and the surprise was such that I missed the first brake flag indicating the approaching corner. I recovered and put it through that tight turn in a tire-squealing cut and came out the other side of the turn with a huge grin on under my helmet.

From then on, my images of blue hair poking over steering wheels inside huge, boring sedans were shed as I once again put the pedal on the floor and alternated tire squeals and motor growls around the curves of the track. By the third lap, the red monster whose wheel I gripped was as exhilarating as any of the economically out-of-reach supercars I'd driven that day. This excitement came not from the Regal being a match for those cars (obviously it couldn't be), but from the amazement it induced and the fun that surprise created.

The ECOTEC 2.0-liter direct-injected turbo 4-cylinder engine puts out an amazing 270 horsepower that gives the Regal GS an extremely impressive 0-60 time of 6.7 seconds. The 3-inch exhaust is part of the reason that this little turbocharged engine makes its low growl when you bury the sporty accelerator pedal into the floor. Driver-selectable Interactive Driver Control System modes mean you can adjust the steering and suspension to match your needs and comfort level.

The 2012 Regal GS has great styling, comes standard with most of the features mentioned above, and has an MSRP starting at $34,835. Driving normally, the GS' EPA ratings are 19 city, 27 highway.

Thus, before you throw off your expectations of the 2012 Buick Regal as a boring car that only your grandparents would own, get into one and believe that it will only be suitable for age-spotted knuckles. Wear a helmet and stay hydrated, though. You're in for some adrenaline.

Bobby wrote on June 18, 2012 - 3:36pm Permalink
I was surprised to see "Grandma's Car" in the title of this article and not see a Lexus in the picture. I think the writer of this article needs to get out of 1992 and join reality in 2012.
Aaron Turpen wrote on June 18, 2012 - 4:38pm Permalink
Or maybe the reader needs to read the article instead of just commenting on the title.
Bobby wrote on June 22, 2012 - 11:06am Permalink
Read the article, still surprised anything that mentions a "Grandma Car" doesn't have a large picture of a Lexus.
Aaron Turpen wrote on June 22, 2012 - 11:22am Permalink
Since the article is about Buick's rebranding efforts, putting a photo of a Lexus would make no sense.