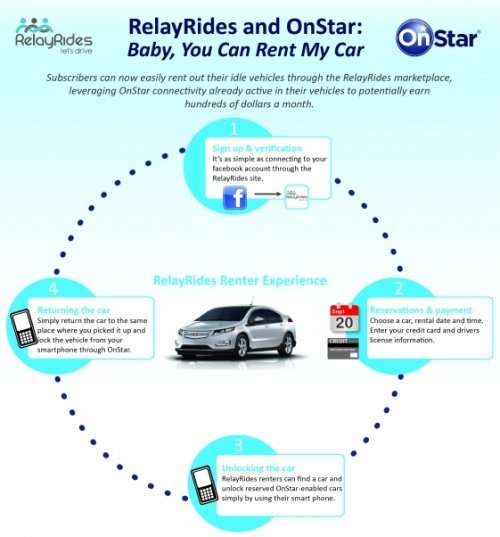 Would you rent out your GM vehicle to strangers if OnStar could keep track of it for you?

General Motors has opened up its OnStar service to peer-to-peer car sharing service RelayRides, allowing people to share their cars through the P2P renter's experience with OnStar as the control system.
Advertisement

Subscribers to GM's OnStar connected car service can now rent out their cars to others using the RelayRides service. GM's investment arm put money into RelayRides when it started up and now the partnership has expanded. GM has allowed the peer-to-peer car sharing network access to its API (application protocol interface) so that it can tie its mobile phone apps and website into the OnStar service, allowing GM customers to use RelayRides to rent their cars to others.

The OnStar integration means that the cars are continually tracked and can be located anytime by the owners, allaying some concerns over theft. The service also means that renters who've properly rented the car can gain access to it through OnStar.

The partnership was originally announced last October, but the service didn't go live until today. RelayRides is the first third party company to gain access to GM's OnStar API, but GM says they'll be opening it to other developers later this summer. GM hopes that adding new services like this will raise the retention rate for buyers who purchase cars with OnStar, but opt not to continue service once subscription fees begin.

Non-GM cars in the RelayRides program require an expensive communications device be installed. OnStar, says the peer-to-peer rental startup, gives them the opportunity to control the car without need of additional gadgets. Unlike other car sharing services like Zipcar or CityCarShare, RelayRides does not own the vehicles being rented, but instead matches car owners to renters as a go-between.

While the idea has had some pitfalls in the past, including one high-end luxury P2P car sharing company called HiGear going under after several cars were stolen through the network, it's catching on in urban environments where many car owners drive only occasionally. Insurance companies are mixed as to whether or not they oppose this idea.

Anonymous wrote on July 17, 2012 - 6:29pm Permalink
This is absolutely retarded, anyone whom has any respect for cars would never consider this. Theres so many stupid people in this world that could never take care of a vehicle the way they should. I.E park in front of restaurants because there to fat to park in a safe spot, open there doors into stuff, have kids and pets.
Aaron Turpen wrote on July 18, 2012 - 4:31pm Permalink
You can stipulate what is and isn't allowed in your car and RelayRides offers insurance for damages as well as a rating system in which renters and owners can rate one another. Of course, if you live in a world where you think everyone is an idiot, then look in the mirror and don't join this sharing service. Nobody's forcing you.