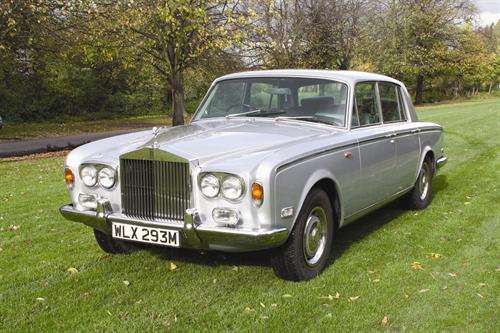 When some of us think of The Queen, we don't think of old ladies and crown jewels. We think of Freddie Mercury and iconic rock anthems like Bohemian Rhapsody. Now Mercury's Rolls-Royce Silver Shadow is going on the auction block in the UK.
Advertisement

In 1979, rock legend Freddie Mercury's managers at Goose Productions Ltd purchased a special order Rolls-Royce Silver Shadow for him to use personally. The car was in his stable of vehicles until his death in 1991, at which time it was bequeathed to his family estate.

The car has appeared at special events and even did a stint in the Freddie Mercury Museum and was last seen at the premier of the Queen musical We Will Rock You in 2002. It has relatively low miles, has been well-maintained, and will be on the auction block with international auctioneers COYS at a low starting bid of only £11,000.

The auction will take place at the Autosport International show at the NEC, Birmingham in England this Saturday, January 12th.

The 1979 Rolls was one of the first models in the company's lineup to use a monocoque chassis, disc brakes, independent rear suspension, and other innovations for the time.

Other vehicles in the COYS auction will include the 1980 Ford Capri S featured in the British sitcom Only Fools and Horses. The car is unchanged from its TV use with the same garish green paint, faux tiger fur interior, and pink aerials that made it a star of the BBC comedy.

An Allard J2 competition car, said to be one of the best of these to ever appear at public sale, and a unique 1935 BMW Type 309/328 Veritas with FIA authenticity papers.

A number of items from the John Etheridge collection will take center stage on the auction block. Race fans will recognize Etheridge's name as one of the top endurance racing champions on the Ford Advanced Vehicle team and a foremost authority on the GT40.

Many other iconic and historical race vehicles will be up for grabs at the auction this weekend.