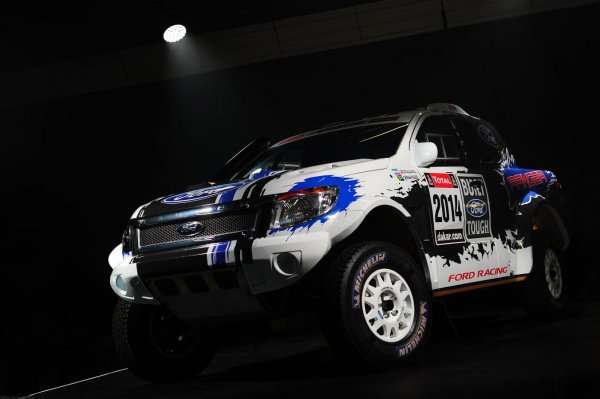 Ford will be entering a spec-designed Ford Ranger from South Africa in one of the world's most anticipated annual offroad rally races.
Advertisement

A collaborative global effort focused on Ford's South African race team has created a race-specific Ford Ranger for the 2014 Dakar coming this January.

The Ranger will be driven by Chris Visser and Japie Badenhorst, South African racers on Team Ford Racing who will also be making their debut at Dakar. The race itself takes place January 5-18 in South America.

The purpose-built Rangers are being built and prepared by Pietermaritzburg-based Neil Woolridge Motorsport and South Racing, a German company, will handle logistics for the race itself. Lucio Alvarez, a South American racer, will also be on board one of the trucks with navigator Ronnie Graue.

Dakar is the most-watched rally race in the world and is considered the most important to the sport. Just doing well is a win. The 2013 Dakar race had an estimated 4.6 million spectators converging on the race map to witness the race and more than a billion people watching it on television through live feeds and daily recaps. Millions more saw feeds and videos online.

“The Dakar is a truly international showcase of Off Road machinery. Last year 745 competitors participated, representing 53 nationalities. We are pleased to have put together a global team that represents exceptional knowledge of the event as well as the Ford Ranger, which is built at the Silverton Assembly Plant in Silverton” says Dave Schoch Group Vice President and President, Asia Pacific.

The 2014 Dakar will be the 35th annual race and will encompass a rally route beginning in Rosario, Argentina and ending in Valparaiso, Chile through thirteen stages of competition and a total racing distance of 8,500 kilometers. This coming Dakar will feature a first-time run through Bolivia as it crosses the Andes.