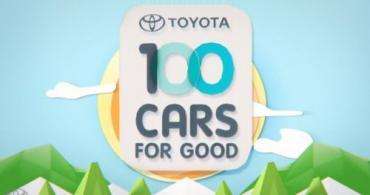 Toyota has announced the first 25 of the 100 total winners in its charity vehicle giveaway program. Have you voted yet?
Advertisement

Toyota's 100 Cars for Good program has been commencing for about a month and so far, Facebook fans have voted for 25 of the 100 charities that will win a new Toyota vehicle. Has your vote been counted?

Every vote counts in the charity giveaway, as five charities vie every weekday to be the one chosen to receive a free car from Toyota. Each day, only one winner is chosen, by popular vote from people just like you visiting the 100 Cars for Good fan page on Facebook. The 25 charities that have won so far include organizations running the gamut in their charitable focus and spanning the nation in location.

Notable winners from the 25 receiving a car so far include the Cincinnati Zoo in Ohio, Pibbles and More Animal Rescue in New York, SPCA International's Operation Baghdad Pups in New York City, The Children's Lunchbox in Anchorage, the Special Olympics of Illinois and more. Most of the charities chosen so far are animal rescue or rehabilitation facilities. The first car was given away on May 14 and has continued with winners being announced up to June 7 so far.

Winning organizations can choose from the following vehicles: Camry Hybrid, Highlander SUV, Prius v Hybrid, Sienna minivan, Sienna Mobility or Tundra full-sized pickup. A six-year, 100,000-mile powertrain warranty will also be provided for each vehicle. 500 finalists are competing to win a free car, though all finalists will receive $1,000 cash grants and free gear from Toyota.

So far, regular people like you and me have voted to give vehicles to the charities we have felt most deserved them. There are still 75 more to go, so every vote counts. Each vote is counted once and then votes reset the next day for a new slate of finalists.

You can find out more about this program and participate in voting at 100carsforgood.com.