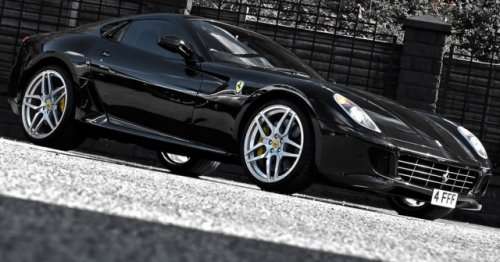 The 599 GTB is getting a last hurrah as A. Kahn Design gives it the once over for perfect customization.
Advertisement

Ferrari has ceased production on the beautiful 599 GTB Fiorano, which will be replaced by the new F12 Berlinetta when it enters production later this year. But the Fiorano is not down and out and is still being delivered off showroom floors as the last of the model's production are sold to eager buyers.

British customizers A. Kahn Design have decided to give the 599 GTB one last "hurrah" by releasing a customization package for the car. Their design leaves the Nero Daytona black paint job in place and, in fact, does little to alter the breathtaking design of the Ferrari's body, with the only external change to the body being slightly different bumpers at front and rear.

A close look reveals other subtle differences, however. The brakes are upgraded to carbon ceramic with yellow calipers. The wheels, which is where the Bespoke name comes from, are the biggest difference seen. At the rear, a massive 22-inch set of Monza-style aluminum alloy wheels from the Kahn collection are added and up front, a 21-inch set to match.

Underneath the body, the gearbox has also been upfitted to an F1 setup for better performance.

Inside, everything is an option with Kahn. Electric sport seats trimmed in quilted black leather and every other aspect of the cabin, from the shifter knob to the dash trim and floor mats, can be changed. Materials like the most sought-after woods, most high-tech carbon fiber, or the strength of brushed aluminum are available.

A. Kahn Design says they plan to add more optional touches to the Ferrari 599 GTB Fiorano with later announcements, but what they've done so far is pretty impressive. Just adding the wheels, brakes, and bumpers have subtly changed the sleekly powerful look of this racer and turned it into something even more smoothly Italian on the track.