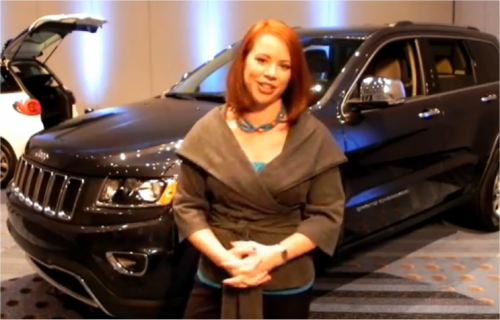 The 2014 Jeep Grand Cherokee is being highlighted at this weekend's 2013 Denver Auto Show. Through an exclusive interview with Wendy Orthman, we learned about the all-new Jeep and its new diesel powertrain.
Advertisement

The 2013 Denver Auto Show runs through this weekend. There are literally hundreds of exciting vehicles this year, but one of the highlights is the all-new 2014 model year Jeep Grand Cherokee. We talked Jeep representative Wendy Orthman into an exclusive interview about the new Grand Cherokee and its highlights, including a new diesel powertrain with class-leading efficiency.

The new 3.0-liter EcoDiesel V6 offers 30 miles per gallon, a total range of more than 730 miles, and a best-in-class towing capability of 7,400 pounds. As Wendy puts it, that range will "..get you darn near to the other side of the country on just one tank." Jeep is also keeping the two popular V6 and V8 options, with the six-cylinder offering 26 mpg and the Hemi 5.7L V8 offering 22 mpg. All significant increases in fuel economy from the 2013 model year.

Most of those gains are thanks to the new 8-speed transmission, which was introduced in the Ram Truck line for 2013. This new transmission for the Grand Cherokee was tuned to give a lower crawl ratio to improve off-road performance for the 4x4.

Also added to the new 2014 Grand Cherokee is the class-exclusive Quadra-Lift air suspension, again a popular feature on the new Ram Trucks, and the exclusive Jeep Selec-Terrain traction management system with new Selec-Speed Control for better traction control. Also, Chrysler's award-winning Uconnect system with its 8.4-inch touchscreen is in the Grand Cherokee and most premium Chrysler Group vehicles. New for the Jeep, though, is the 7-inch customer-configurable multiview cluster display in the instrument gauge cluster. This allows the driver to customize the information being shown as well as utilize options such as cloud-based voice texting.

To find out more about the 2014 Jeep Grand Cherokee, check out this quick interview with Wendy Orthman from Jeep at the Denver Auto Show: