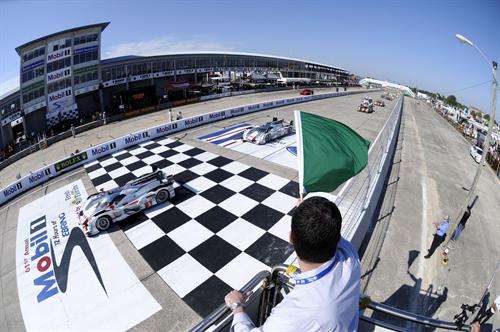 Audi's new hybrid racer, the R18 e-tron quattro, became the first hybrid car to win at Sebring in the American Le Mans Series. Other wins include a first for Corvette Racing and a record for Honda in Level 5.
Advertisement

The heat was on in Florida at the Sebring International Raceway this weekend as the 12 Hours of Sebring saw records set in several categories.

The star of the race was the Audi Sport team in their No. 1 Audi R18 e-tron quattro GT, which became the first hybrid car to win at Sebring and in the American Le Mans Series presented by Tequila Patron. Driven by Marcel Fassler, Benoit Treluyer and Oliver Jarvis, the R18 e-tron quattro crossed the line, beating sister car No. 2, which placed second. The winning driver was Treluyer, who took the final two stints of the endurance track. Third place went to Rebellion Racing in their No. 12 Lola-Toyota driven by Neel Jani, Nick Heidfeld and Nico Prost.

In the GT class, Corvette Racing set a new placeholder, with the No. 4 Corvette C6 ZR1 driven by Oliver Gavin and Richard Westbrook, taking the win for the first time since 2009, marking Corvette's return to prominence in the GT. The Corvette narrowly beat the Risi Competizione Ferrari F458 Italia.

The GT Challenge was won for the second straight year by Alex Job Racing in their No. 22 Porsche 911 GT3 Cup, driven by Jeroen Bleekemolen, Cooper MacNeil, and Dion von Moltke who dominated the race early and vied closely with No. 66, which lost its position during refueling, so second went to the No. 45 Porsche from Flying Lizard Motorsports.