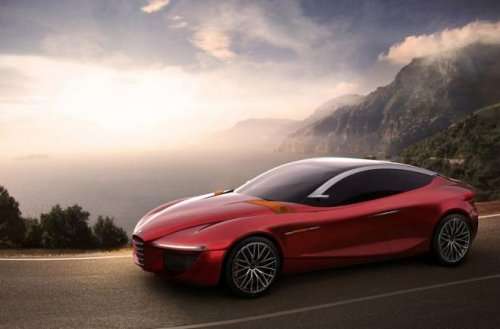 A collaborative project between Alfa and students at the European Design Institute, the Gloria is a car meant for the Asian and American markets.
Advertisement

Set to debut at the Geneva Motor Show next month, the Alfa Romeo Gloria concept was made in collaboration between students at the European Design Institute of Turin and the venerable premium carmaker.

The concept is a sedan based on a 4C chassis with similar dimensions at 4700mm by 1920mm by 1320mm high (185 inches long, 75.5 inches wide, and 52 inches high). Although not clear in the rendering or description, the sedan appears to be a four-door with suicide-style doors.

In keeping with Alfa Romeo styling cues, the concept is long of hood with a prominent grille sporting deep scoops, has slender lights, a low roofline, and curvaceous bodywork. Cues include the Alfa hood "V" and deep cuts at the base of the door to hint at running boards. The contrasting roof with chrome sweeps is a nice touch, as are the 20-inch OZ Racing wheels spoking out to meet thin-walled tires.

No announcement on engine specifics was given, but it is said to be capable of accommodating a "start of the art V6 or V8." We'd assume one of the new twin turbos from parent company Fiat in the latter case.

The car's design is meant to appeal to the Asian and American markets, signalling that Alfa Romeo is still thinking about the U.S. and it's eventual re-entry here. The often-sold company is said to be aiming for a 2014 return to the U.S., but given their storied recent history of announcing and delaying, that could just be another "maybe.. we'll see" date.

To go along with the debut of this stunning new concept, the OZ Racing project also sponsored Design Institute students to create a new iPad app for customizing Alfa Romeo vehicles. Its demonstration will include "ordering" one of these new Alfa Romeo Gloria concepts with five different body color and wheel choices.