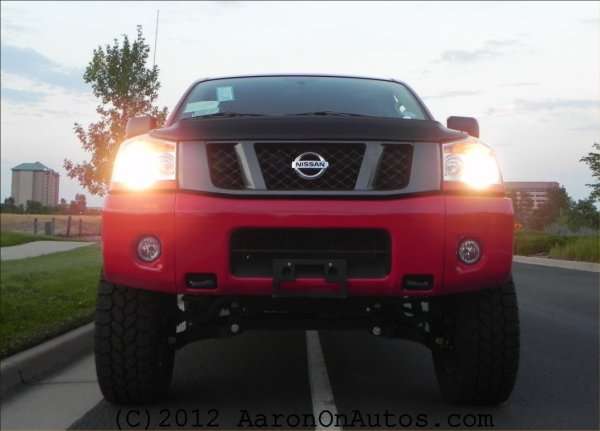 The 2014 Nissan Titan will sell for the same price the 2013 model year did, proving that Nissan is dedicated to bringing value to the full-sized truck market. Find out more.
Advertisement

Nissan has listed prices for the 2014 Titan full-sized pickup truck, though the diesel option is missing from the list. More on that in a moment.

The Titan is being offered in both King and Crew cab and in two- and four-wheel drive options. Models include the base S, the SV, the Pro-4X, and premium SL. Wheelbase options include Standard and Long. The Titan is built on the F-Alpha pickup platform which features a long-proven 5.6-liter dual overhead cam (DOHC) Endurance V8, 317 horsepower engine producing 385 lb-ft of torque. Its five-speed automatic transmission (standard) offers 9,500 pounds of towing in the King Cab and 9,400 pounds of towing in the Crew Cab box.

The standard wheelbase is 139.8 inches, offering two bed lengths depending on cab option. The long wheelbase for the 2014 Nissan Titan is 159.5 inches and allows for the long bed option. The following manufacturer suggested retail prices (MSRP) do not include destination and handling.

Missing from this list, of course, is the new Titan Diesel being offered for 2014. That will be announced at a later date, likely when the truck debuts in the coming weeks. The diesel offering is of huge interest because it's a massive V8 Cummins producing 550 lb-ft of torque. This makes it the largest diesel offering in the half-ton pickup truck market and one of the largest offered in the heavier three-quarter ton (2500) market as well.

The gasoline versions of the 2014 Nissan Titan listed here are now available in dealer showrooms nationally. The Titan is built alongside the Armada at Nissan's Canton, Mississippi plant.