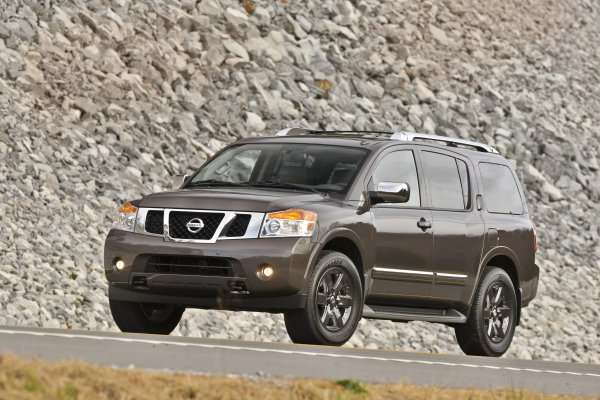 Nissan's full-sized SUV gets price and package details for the U.S. market. No major price changes from last year, making the 2014 Armada a great buy.
Advertisement

The 2014 Nissan Armada full-sized SUV began rolling off the factory line in Mississippi last month and is now in showrooms nationwide. Three models are available, including the Armada SV, Armada SL and Armada Platinum. Each offers both two-wheel and four-wheel drive options.

The 2014 Armada comes standard with the well-proven 5.6-liter Endurance V8 engine and five-speed automatic transmission. This drivetrain produces 317 horsepower. The Armada seats up to eight people, has 97 cubic feet of cargo space, and a maximum towing capacity of 9,000 pounds with the towing package.

For the new model year, Nissan changed little on this powerful sport utility. A few technology options have seen upgrades, but the Armada isn't due for a design refresh - that's likely to come with the 2015 model year announcement.

Sales for the 2014 Nissan Armada are expected to continue growing from last year and keeping the price levels the same will be a big part of that. The Armada is not a best-seller for the company, but the overall full-sized SUV market is no longer as large as it once was and is shrinking rather than growing.