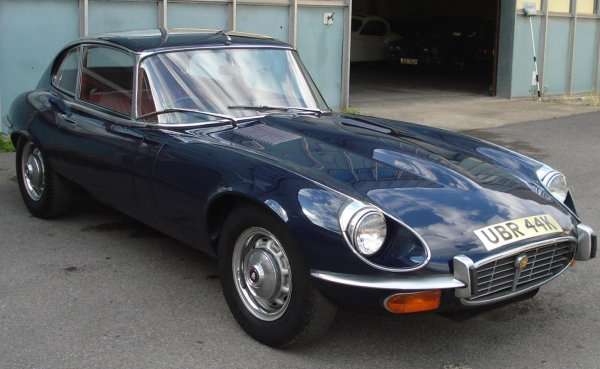 Selling at more than double its expected top value, the E-type S3 FHC sold this week at a Baron's auction in the UK.
Advertisement

Earlier this week, the Baron's British Heritage Sale at Sandown Park in the United Kingdom featured some beautiful examples of British steel on the block. Drawing a lot of attention was the collection of late collector David Cheeseman, many of which were one-owner originals. Included in that stable of lovelies was a 1972 Jaguar E-type S3 FHC, one of the most iconic big cats ever made.

Many other cars were also there, of course. An XJ6 Series 2 SWB also sold above value at £13,732 (valued at £10,000). One of the more anticipated vehicles out of the Cheeseman collection was a red E-type S3 Roadster, under one ownership for 29 years and with under 60,000 miles, beat its top estimate by a few points at £42,072. Had it been 100 percent original, some believe it would have gone far higher.

The star of the auction was clearly the 1972 Jaguar E-type S3 FHC, however, as one of the most-recognizable Jags ever made. Although manufacture began in the 1961 model year, many enthusiasts see the last-generation (Series 3) as the pinnacle of the car's development, with the exception of the limited-edition Lightweight versions being rebuilt now.

The Series 3 (E-type S3) featured a 5.3-liter, twelve-cylinder engine, better braking, standardized power steering, and a short wheelbase despite its long hood and huge powerplant. About 7,297 Series 3 cars in the 2+2 configuration, as sold here, were made.

John Goreham wrote on September 8, 2014 - 4:52pm Permalink
On Wheeler Dealers this past week Mike Brewer buys a Jag this same vintage, takes it from the UK to Poland, he fixes it up and sells it for half that price, but it is not as nice. And it was yellow with bad paint. However, completely original. Who the heck buys a hard-top E-type?
John Goreham wrote on September 8, 2014 - 4:55pm Permalink
I also just heard (maybe here?) that Jag is going to build a couple E-type lightweights with original, unused VINs - NEW. They will be worth millions.