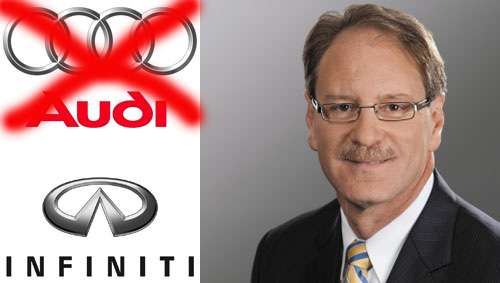 First came the news last week that Johan de Nysschen was stepping down as head of Audi in the U.S. and now comes the announcement that he will be appointed as senior vice president of Nissan Motor Company in charge of Infiniti effective July 1, 2012.
Advertisement

The news of de Nysschen's departure from Audi for Infiniti can be viewed in two ways: Audi has hit the wall in terms of near-term growth for either the brand and/or de Nysschen's future or Infiniti offered greener pastures for him.

It's a combination of both, according to some industry insiders. There was some speculation that the reporting structure might be changing at Audi/VW in the United States, which apparently didn't sit well. After all, de Nysschen has been head of the division while it has undergone incredible sales growth.

In fact, one of his last official acts, before announcing he was resigning, was a press release that stated Audi reported record-setting May sales with a 10 percent increase to 11,503 new vehicles sold, marking the 17th consecutive month of unprecedented sales in the U.S. May sales not only represented all-time record total sales for the January-May period, but also marked the fifth-best month ever for the brand, exceeding more than 11,000 in total vehicle sales.

Now he's hoping to spread some of that magic to Infiniti across the globe. The luxury arm of Nissan was hard hit by the 2011 Tsunami that crippled its production for a while. It is just now returning to strong sales levels thanks to ramped up marketing and production, as well as a great new product in the JX 7-passenger luxury crossover.

"We have exciting and ambitious plans for improving the Infiniti brand including introducing new models in all markets where premium customer demand exists," said Palmer. "Johan is a highly successful global luxury automotive executive and his leadership of Infiniti will be a key factor in realizing the potential of the Infiniti brand," continued Palmer.

Also interesting is the fact that the new Infiniti management already had a strong Audi flavor. Jeff Kuhlman in December was appointed Divisional General Manager and Head of Global Communications and is based at the company's headquarters in Yokohama, Japan. He joined Nissan from Audi of America, where he was the chief communications officer since 2006, and where he worked closely with de Nysschen for five years.