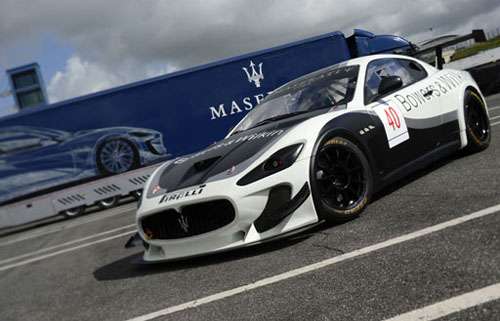 Riccardo Romagnoli and Giorgio Sernagiotto took the first two pole positions in the 2012 Maserati Trofeo MC World Series. The action on the track is being held at Jarama, Spain, with the race taking place May 20 at 10:35 a.m. local time.
Advertisement

Romagnoli – who has a number of career wins like the 2007 GT Open under his belt - set the best time of 1:38.374 on the last lap to edge out Cedric Sbirrazzuoli (1:38.660). Sbirrizzuoli saw the pole it took just two laps to seize disappear as he waited in the pit lane to avoid traffic and keep his tires in good shape for tomorrow. Still, Sbirrazzuoli, racing alongside Alessandro Chionna for AF Corse, set the fastest Team time. This year there is a new Overall category to go with the Trofeo and Team standings.

The 1:39.160 set by Konvex Racing's Belgian driver Renaud Kuppens (who has a background in FIA GT) showed how comfortable he felt on the Spanish circuit. This was proved by his improved lap in qualifying for Race 2 (1:38.283), behind Italian Giorgio Sernagiotto (1:37.868). Third in the 23-strong Maserati Trofeo grid is Andrea Dromedari from Swiss Team (1'39.017).

Both sessions were run in light rain. This made some sections damp but did not mean that the drivers had to reach for new tires.

Romagnoli said, "I tried to make the most of my knowledge of the track and the car seeing as I had driven it in last year's Giro d'Italia for cars. I felt positive right away and I thought we might do well from free practice on. I did everything I could on the last lap and picked up a little towards the end. I drove on the limit and managed to nick it right at the end."

Sernagiotto commented, "My Maserati experience has begun with a pole position and this can only be positive. I was surprised by the car as I thought it would be hard to drive given its weight. In reality it went well and the car was well balanced. I am also pleased with our pace as it was just a touch off the Spanish GT times. I really like the circuit. Overall, I have only positive feelings but this is just the first race and it will be a real challenge because the competition is tough. Tomorrow it should be a great race. We will have to keep an eye on the tire wear. It will be a scrap if it rains so I hope it stays dry."

Now in its third year, Maserati's single-make series has made a number of big changes for 2012, the biggest of which have been to the race calendar. Now, the European boundaries have been broken with events programmed for the Infineon Raceway in Sonoma, California, and the F1 circuit in Shanghai, China. The championship can now be called truly global.

Maserati will take care of running the series. The all-inclusive format suits gentleman drivers and those who want to race high-performance cars from a marque that has long been associated with motor racing.

The 2012 season officially gets underway with this weekend's tests at Vallelunga to kick off a series won by David Baldi last year. The two test days will see around 40 drivers from 12 countries trying out the new car. There will be drivers from Italy, Denmark, Holland, Belgium, Austria, Switzerland, England, Germany, Monaco, San Marino, Hungary and the United Arab Emirates taking part. The race will move to the United States but no American drivers are involved at this point.

The first round in the series is scheduled for May 20 at Jarama, Spain. It is then on to Portimao, Portugal, on June 3, Imola (Italy) on June 24, and Paul Ricard (France) on July 22. Then come the two events that wrap up the season: in North America, on September 23, and Asia on November 4.

The GranTurismo MC's new set up, featuring an aerodynamic bodykit and reduced weight, will make it more competitive. During test sessions held during the winter break, the car showed that its performance was much better as it lapped at an average of 2.5 seconds quicker than the 2011 version. The 2012 races are also new, with two formats to be run: the standard 40 minute event will be run for three rounds with the other three rounds made up of endurance races of two 30 minute and one 50 minute event. The 50 minute races will feature a compulsory pit stop and driver change for cars crewed by two drivers.