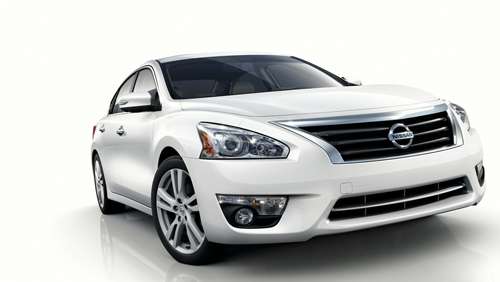 2013 Nissan Altima Gets its New Start

Today marked the start of production of the new 2013 Nissan Altima at the company's Smyrna Vehicle Assembly Plant in Tennesseee: the start of the 5th generation of the popular midsize sedan.
Advertisement

The first Nissan Altima rolled out of Smyrna back in 1992 as a 1993 model. Since then, more than 4.4 million have been produced. Nissan is calling this the "most innovative Altima yet" with new levels of " innovation, fuel-efficiency, dynamic performance and premium style."

To commemorate Altima's start of production, Tennessee Governor Bill Haslam joined Smyrna team members and Nissan leadership as the first all-new mid-size sedan rolled off the assembly line. Smyrna will serve as home to more "firsts" in the coming months, including welcoming production for the 100-percent-electric Nissan LEAF and the batteries that power it, the next-generation Nissan Pathfinder, and, in 2013, the next-generation Nissan Rogue.

The Altima begins arriving at Nissan dealers nationwide in June with a manufacturer's suggested retail price (**MSRP) of $21,500. Like previous generations, the 2013 Nissan Altima will also be manufactured in Canton, Miss., and the engines will be produced in Decherd, Tenn.

"Thirty years ago, Nissan North America was at the forefront of what is now a thriving Tennessee auto industry that has brought good-paying jobs and economic growth to our state. With the new 2013 Nissan Altima coming off the line today, I want to congratulate Nissan, its employees and all those involved in making this another successful year," said U.S. Senator Bob Corker. "I truly believe Tennessee is now THE state for auto production in America, and Nissan deserves a great deal of credit for helping make that a reality."

Among the 2013 Altima's many attributes, according to a Nissan announcement, are a targeted best-in-segment fuel economy of 38 mpg highway (2.5-liter engine), new premium exterior styling with a strong presence and excellent aerodynamics, an upscale interior with premium materials, and an outstanding balance of ride comfort, stability and a fun-to-drive demeanor with projected best-level acceleration.

Pricing for the 2013 Nissan Altima starts at $21,500. Two powertrains will be offered: a choice of a redesigned 182-horsepower (est.) 2.5-liter DOHC inline 4-cylinder engine or a 270-horsepower (est.) 3.5-liter V6, with both engines matched with standard Xtronic continuously variable transmission.

Smyrna Assembly Plant employs approximately 5,600 employees and is 5.4 million square feet. The models produced at Smyrna include the Nissan Altima midsize sedan, Frontier, Maxima, Xterra and Pathfinder. In early 2012, the 2013 Infiniti JX became the first Infiniti and first luxury vehicle ever built in Tennessee. This year, the Smyrna manufacturing complex will begin producing the all-new Nissan Pathfinder as well as the 100-percent electric Nissan LEAF and the lithium-ion batteries that power it. In 2013, the all-new Nissan Rogue will join the Smyrna-produced lineup when it's built in the United States for the first time.