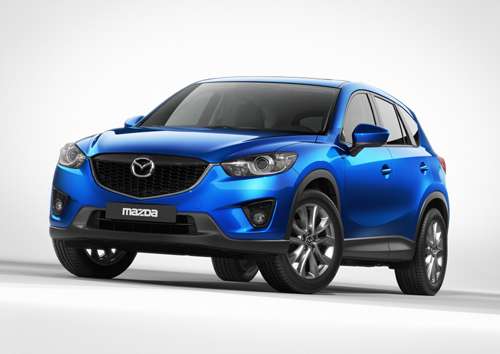 Mazda has announced pricing for its all-new 2013 CX-5 compact crossover that gets the best non-hybrid fuel economy in its class. In a move that bucks the usual Mazda trend, the vehicle is priced competitively in the compact segment in spite of a weak Yen.
Advertisement

The 2013 CX-5 Sport starts at a competitive $20,6952 MSRP, which is below the segment’s sale leaders. Paired with the Skyactiv-MT six-speed manual transmission, the entry-level Sport trim is equipped with high-level standard amenities such as 17-inch aluminum alloy wheels outfitted with 225/65R17 Yokohama all-season tires, daytime running lights, power side view mirrors, automatic headlight shutoff as well as stylish exterior cues in body-colored outside mirrors with turn lamps, door handles, a roof spoiler and a color-keyed shark fin antenna.

CX-5 Sport models equipped with the optional Skyactiv-Drive six-speed automatic transmission start at $22,095 MSRP. When equipped with Mazda’s all-new active torque-split all-wheel-drive (AWD) system (6AT models only), the starting price is $23,345 MSRP. Skyactiv-Drive becomes standard on Touring models, which start at $23,895 MSRP with front-wheel-drive (FWD) and $25,145 MSRP when equipped with AWD. Available in either FWD or AWD configurations, the Grand Touring model starts at $27,045 and $28,295 MSRP, respectively.

“The 2013 CX-5 is a look to the future of the Mazda brand,” said Jim O’Sullivan, president and CEO, MNAO, said in a news release made available to TorqueNews. “Our achievements in research and development have led to breakthrough engineering with Skyactiv Technology. It shows not only in the CX-5’s impressive fuel economy but also with its dynamic handling and performance, which only Mazda can bring to the compact crossover SUV segment.”