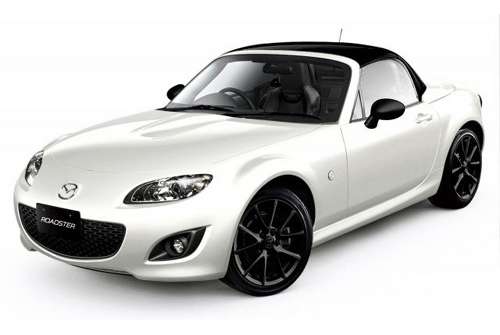 The Chicago Auto Show, which kicks off its media preview Feb. 8-9 before opening to the public on Feb. 10, features the debut of a special edition 2012 Mazda MX-5 Miata that will have a limited production run of 450.
Advertisement

Chicago might seem like an interesting place to roll out a convertible but the Miata and the Windy City go way back. The first Miata made its global debut – not just its North American debut – at the 1989 Chicago Auto Show. Mazda must be superstitious because the MX-5 Miata is the world's best-selling two-seat roadster with more than 900,000 produced.

The 2012 MX-5 Miata Special Edition is simply put a stunner. The picture accompanying this article may not do it justice. The top, if it were cloth, would probably not look that attractive but it's a black-only Power Retractable Hard Top. It’s the first time Mazda is rolling out a MX-5 with a roof that doesn't match the body color.

Available with either the six-speed manual transmission with short-throw shifter or six-speed Sport automatic transmission with steering-wheel-mounted paddle shifters, the Special Edition model is based off the Grand Touring model. Both premium and suspension packages will be standard on the MX-5 Special Edition and include features such as a Bluetooth® hands-free phone system, Sirius Satellite Radio, Bilstein shocks and a sport-tuned suspension.

As the television huckster would say, "But wait, that's not all!" Mazda is going to also be rolling out some other special vehicles at the Chicago Auto Show:

* Turbo2 - Unveiled at SEMA in November, this concept is the brainchild of The Autobarn, which owns two Mazda dealerships in the Greater Chicago area. Here, a "Zoom-Zoom Concentrated" Mazda2 is outfitted with an extra-strength component in the form of a MAZDASPEED3 MZR 2.3-liter Direct Injection Spark Ignition (DISI) turbo engine. Finally, the Mazda2 gets some much-needed oomph.

So, if you're in the Windy City for the Chicago Auto Show, check out the Special Edition 2012 Mazda MX-5 Miata and place your order. They are bound to sell out quick.

LG's New EV Battery Plant Is a Welcome News for Tesla
Tesla Giga Berlin's New Hurdle: It's Not Only the Gov't, but Now Tesla Itself
END_OF_DOCUMENT_TOKEN_TO_BE_REPLACED