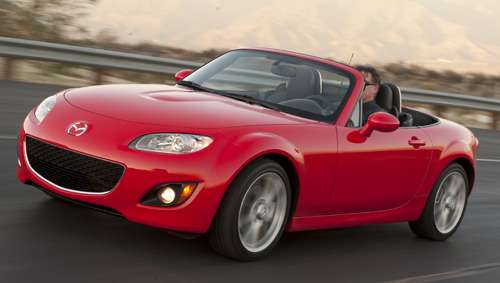 This is the second year in a row the two-seat roadster has been honored. It was selected after evaluation by NEMPA media members including driving from Brookline, Mass., to Kennebunkport, Maine, and back. Automotive journalists also got to spend an additional week with the car.

For more than 20 years, the Mazda MX-5 Miata has offered sports car enthusiasts a pure, uncomplicated and fun-focused roadster at an affordable price. Sticking to that simple concept has made the MX-5 the most popular two-seat convertible sports car in the world with more than 900,000 units produced, qualifying it as a Guinness World Record holder.

“It is an honor to receive this award for the MX-5 Miata,” said Jim O’Sullivan, Mazda North American Operations’ (MNAO) President and CEO. “Whether you are commuting to work or taking a relaxing drive on the weekend, driving the Miata will put a smile on your face.”

NEMPA President Keith Griffin (the author of this article) said, “Mazda continues to stay true to its winning formula of fun-to-drive, affordable, light weight, sports cars with its third-generation Miata. It was an easy choice to name the Miata NEMPA’s Favorite Fun Entry-Level Convertible for the second consecutive year.”

On the Mazda media site, it sounds like Mazda is not sitting idly by with the MX-5 Miata in spite of its continued accolades. "As we head toward the next production milestone of one million units, Mazda is committed to further evolving the MX-5 Miata," said Seita Kanai, Mazda Motor Corporation (MC) senior managing executive officer, research and development. "We will refine its fun-to-drive character as well as further enhance its environmental and safety capabilities. In the years ahead, we will continue to cherish the MX-5 alongside its loyal fan base as the symbol of the Mazda brand."