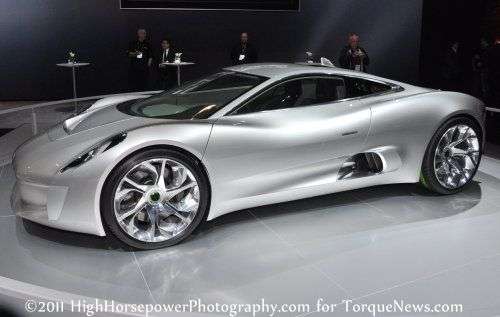 Jaguar announced this morning in London that it is going to build the hybrid supercar concept called the C-X75 and it's going to require massive fuel savings for most of us because it has a price tag starting at $700,000 and just goes north from there.
Advertisement

Only 250 of the Jaguar C-X75 Hybrid Supercar models will be built Jaguar said, which probably helps boost that premium price but the announced performance levels are going to be amazing with a 0-60 mph time of less than 3 seconds and an equally impressive 0-100 mph time of less than 6 seconds. Jaguar said top speed will be in excess of 200 mph from a downsized highly boosted gas engine with two powerful electric motors and four-wheel-drive, making it one of the fastest production cars in the world.

And the best part is you're helping the environment at the same time. Well, if you believe that is the primary reason for buying this car, there's a bridge for sale in Brooklyn. But Jaguar does claim the C-X75 Hybrid Supercar has an all-electric running range in excess of 30 miles but one gets the sense that a full engagement of the throttle could drop that number to less than 10 miles quickly. Also for those of you who track and understand these things, Jaguar expects this hybrid supercar to deliver incredibly low CO2 emissions of less than 99g/km.

This high-performance hybrid supercar will stay true to the initial concept design study that made its debut at the 2010 Paris motor show, while fulfilling requirements that allow it to be homologated for road use. Jaguar C-X75 will be developed in association with Williams F1 who will provide their engineering expertise in areas including aerodynamics, carbon composite manufacture and hybrid technologies. The production of Jaguar C-X75 will create more than one hundred highly-skilled jobs in the UK.

The supercar’s chassis will be made of carbon-fiber to create a lightweight, yet strong structure. Aiding the transition from concept to production vehicle is the choice of powertrain. Jaguar continues to develop the use of the micro-turbine technology that was showcased in the original concept C-X75. Jaguar’s parent company Tata has taken a significant stake in Bladon Jets, and will develop this advanced technology as a medium-term aspiration that will play a part in Jaguar vehicles of the future.

The road-going supercar will use a state-of-the-art, small-capacity, highly-boosted internal combustion engine with one powerful electric motor at each axle. “The engine’s compact size allows it to be mounted low in the car for optimum weight distribution and to retain the concept’s stunning silhouette. This will make the Jaguar C-X75 a bona fide hybrid supercar capable of silent electric running with an extensive EV range in excess of 50km,” explained Bob Joyce, Group Engineering Director, Jaguar Land Rover, in an announcement.

“Never before has the company launched such an ambitious, world-beating vehicle program,” said Carl-Peter Forster, CEO Tata Motors. “This is the Jaguar of the future. The opportunity for innovation like this in the UK is part of the reason Tata Motors invested in Jaguar, and it’s fantastic that products like the C-X75 can become reality.”

Don't call collect or the will probably know you can't afford the Jaguar C-X75 hybrid supercar.