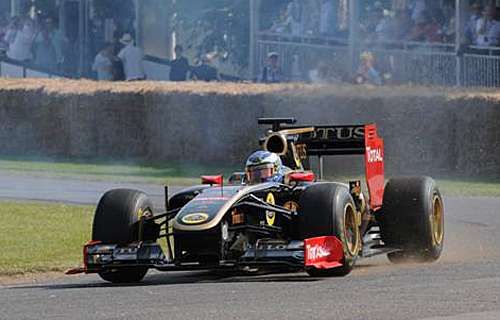 Goodwood Will Be Lotus Loud this Weekend

The hills will be alive with the sound of Lotuses this weekend at the 2012 Goodwood Festival of Speed, which celebrates Lotus innovation, engineering, heritage and style.
Advertisement

Lotus plans to bring two score (or 40 as the math challenged say) of its product to Goodwood, which bills itself as the world’s greatest celebration of car culture For 2012, plans include a record number of Formula One drivers and teams, classic vehicles, planes and bikes galore in attendance from June 28 through July 1 at the Goodwood House in West Sussex, England.

Some of them, no doubt, will be driving the brand new Grand-Am car, the Evora GX racer. Like the GTC, it’s the Evora on a diet, fitted with more rubber and flared wheel arches. Weighing in at just 1,150 kilograms (or about 2,530 lbs.) and mated to a 440 horsepower V6, it’s been configured to meet the American series’ spec with some aerodynamic changes to the front, a stock Grand-Am rear wing, and the removal of ABS and traction control, putting driver skill paramount and the promise of some spectacular tire smoking.

Keeping up with that whole Lotus Loud thing, Lotus announced it will be blasting its most recent models up the hill, like the Exige R-GT rally car, making its UK debut, the Lotus T125 and the tire-squealing Exige S.

Away from the track, Bonhams is holding an auction of Lotus road and racing cars – 24 models stretching all the Lotus eras; from a Le Mans veteran Team Lotus Type 11 and ex-Formula One Type 18 to a selection of mint road cars and three unique concept cars.

As Lotus pointed out in an announcement of its plans for Goodwood, these and other two-seat toys of the 21st century might not exist were it not for the little Lotus Elan, which celebrates its 50th birthday this year (as does this writer). Lotus pays homage to this revolutionary sports car on its stand taking pride of place alongside the current Lotus line up.

Also on the Lotus stand, Lotus Engineering will show a number of technologies that can improve both performance and efficiency for cars of the future. Leading the Lotus Engineering display is the Lotus Evora 414E Range Extender Electric Vehicle, complete with HALOsonic active noise control and a virtual seven speed gearbox. This technology demonstrator produces 414 PS and an incredible 737 lb. ft. of torque from the two electric motors that drive the rear wheels. These amazing figures help slingshot the Evora 414E to 60 mph in around four seconds. Back at the Lotus Headquarters in Norfolk, an Evora 414E is now undergoing test work. Lotus Engineering will also show its SABRE engine which demonstrates “powertrain downsizing” where the torque and power of this 1.5 liter, 3 cylinder engine is the equivalent to a 2.2-liter, 4 cylinder but with the fuel efficiency and economy benefits of the smaller engine.