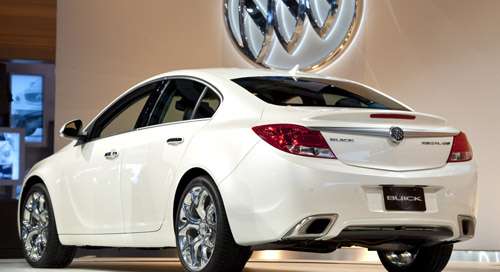 The Made in the USA Foundation is hurling a charge against GM that its cars on display at the 2011 Detroit Auto Show are not labeled properly when it comes to their country of origin, i.e. where they are built.
Advertisement

The Beverly Hills based organization says GM is violating American Automobile Labeling Act (AALA) that requires all new cars that are offered for sale to include country of origin information. According to the foundation, GM claims that cars displayed at shows like the 2011 Detroit Auto Show are exempt because the law only applies to cars being sold – and not those displayed. A GM spokesman told TorqueNews.com the criticism is ironic because GM builds the only B-segment car manufactured in the United States – the Sonic.

Joel D. Joseph, chairman of the Made in the USA Foundation, said in a statement,"General Motors wants to hide the fact that, even after the government bailout, it has moved production of vehicles offshore. The Cadillac SRX is now made in Mexico. The Buick Regal is made in Germany. Millions of consumers get their first look at cars at auto shows. The law applies to cars that are 'for sale' and auto show cars, except concept cars. Identical GM cars are for sale at thousands of dealers across the nation, and display vehicles should include country of origin information. The U.S. government saved GM and still owns one-third of the company. General Motors should comply with the intent of the law."

GM spokesman Greg Martin countered that the issue seems like almost a non-issue. At major shows like Detroit, Chicago, New York and L.A., the manufacturers display their own fleet of cars unlike regional shows where the cars displayed are largely from dealer stock and thus have Monroney stickers that would show manufacturing content. Manufacturers are not allowed to sell directly to the public.

“We have the highest manufacturing footprint in the United States,” said Martin, adding that GM has invested $3 billion in factories and brought 10,000 people back to work (with more to come in the first quarter) since coming out of bankruptcy. Production of the Sonic begins later in 2011 at the General Motors Orion Assembly Center in Michigan, which received a $545-million investment in upgrades and retooling, and will help restore approximately 1,000 jobs in the metropolitan Detroit area. according to GM.

A reading of the NHTSA website, which oversees the American Automotive Labeling Act regulations, does not indicate an exclusion for auto shows. It seems to indicate that it applies to all new cars manufactured.

The Made in the USA Foundation, created in 1989 by grants from the United Auto Workers and Ford Motor Co., says on its website it is dedicated to promoting products manufactured in the USA, as well as products assembled in the USA. It also pursues litigation and legislative activity to strengthen and uphold labeling laws and standards.

Joe E in the IE wrote on January 24, 2012 - 1:36pm Permalink
"General Motors wants to hide the fact that, even after the government bailout, it has moved production of vehicles offshore. The Cadillac SRX is now made in Mexico. The Buick Regal is made in Germany." And they still use the word "import" as a pejorative in their advertising, as in "outsells the imports". Yes, true, the German- and/or Canadian-made Buick Regal outsold Honda Accords and Toyota Camrys imported into the USA from Japan only because it's darn near impossible to buy an Accord or Camry imported from Japan. They're made in the USA with enough domestically sourced parts to be labeled so. The hypocrisy boggles the mind.